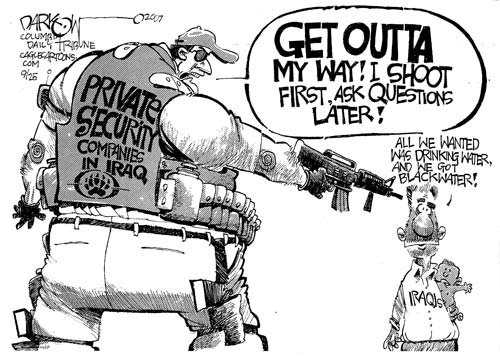 Several years after its departure, the conditions under which the private security firm Blackwater carried out its missions in Iraq continue to make waves. On Monday, The New York Times revealed a document that proves the impunity the security company enjoyed during its missions in Iraq. This was an excessive power that was not unrelated to the dissolution of the Iraqi army, whose effects are still being felt today.

Known especially for its blunders and staggering contracts in the Bush era, which have permitted the firm to prosper, The New York Times revealed on Monday June 30, a document which proves the impunity Blackwater enjoyed in Iraqi territory, while last June 11, the trial of four members of Blackwater accused of voluntary manslaughter during the shooting in Nisour Square, which caused the death of 17 Iraqi civilians on Sept. 16, 2007, began.

The memorandum revealed by the American newspaper, written by an investigator from the U.S. State Department, Jean Richter, shows that in August 2007, the American military administration was acquainted perfectly with the excesses of the security missions entrusted to the firm Blackwater. Having arrived in Iraq on Aug. 1, 2007 to evaluate the “performance” of the firm charged to protest the American diplomats there, the investigator lists the mistakes made by the firm’s employees: failure to maintain vehicles, employment of foreign contractors in difficult conditions, inappropriate behavior of the employees, etc. “The purpose of this memorandum is to inform you of a disturbing incident that occurred on Aug. 21, 2007 while I was on TDY in Iraq. I found this incident disconcerting on many fronts; however, most of all, it underscored the lack of professionalism and discipline that has been systemic during the performance of our WPPS contracts in Iraq,” writes the U.S. Secretary of Defense’s investigator.

Blackwater, the Most Powerful Army in the World

Jean Richter explains then being placed in contact with Daniel Carroll, in charge of Blackwater in Iraq. The first meeting was rude: “In his response to my inquires, Mr. Carroll claimed that the WPPS II Camp Baghdad was not technically Department of State property and therefore not under Chief of Mission (COM) authority. Mr. Carroll accentuated this point by stating that he could ‘kill me’ at that very moment and no one could or would do anything about it, as we were in Iraq … I took Mr. Carroll’s threat seriously. We were in a combat zone where things can happen quite unexpectedly, especially when issues involve potentially negative impacts on a lucrative security contract.”

The report describes above all an all-powerful security firm in Baghdad, having even taken control of the American police, military and diplomatic administrations: “The contractors, instead of Department officials, are in command and control. The management structures in place to manage and monitor our WPPS contracts in Iraq have become subservient to the contractor themselves.” Clearly, in 2007, Blackwater “reigned” over Iraq. One finds there more private contractors (180,000) than regular soldiers (160,000). Author of a report on the firm Blackwater, the American journalist Jeremy Scahill, baptized it “the world’s most powerful army,” describing precisely the privatization of military affairs after the Sept. 11 attacks, and the jackpot landed by Blackwater in 2006 when it obtained the security contract for American bureaucrats and institutions in 27 countries.

Jean Richter’s report was transmitted to the State Department on Aug. 31, 2007 — barely two weeks before the carnage was going to start to attract the attention of the media and the military authorities to the firm Blackwater.

On Sept. 16, 2007, five American private guards, paid by Blackwater, opened fire right in the center of Baghdad on unarmed civilians. Seventeen dead and 24 wounded are recorded among the Iraqi civilians. The guards affirm that they were attacked, which contradicts all the Iraqi witnesses. The Iraqi Prime Minister, Nouri al-Maliki, had described the shooting as a “massacre” and Baghdad officially called then for the departure of the firm within six months.

In 2009, an American judge had dismissed charges against five Blackwater ex-employees because certain of their statements just after the shooting would not be able to be used against them by the prosecutor. Two years later, an appeals court restored charges against four employees, opening the way to an actual trial.

Is Blackwater to Blame for the Decline of the Iraqi Army?

The leadership of the company will deny all fault, claiming that its agents implicated in the Baghdad shooting felt themselves threatened. But other incidents implicating members of Blackwater will be discovered. All have been “dealt with” discreetly. The Nisour Square massacre nevertheless will constitute a turning point in the Iraq war, which has seen anti-American sentiment prosper in Iraq. But it’s also the impunity from which the members of Blackwater benefited that provides the reasons for the failure of negotiations between Washington and Baghdad on the maintenance of a contingent of 3,000 American instructors to train Iraqi soldiers.

Washington required, in effect, total immunity for its soldiers, sheltering them from all legal proceedings in Iraq, which Baghdad refused. It is impossible in 2011 for Baghdad to accord judicial immunity to American soldiers while none of the Blackwater mercenaries have yet been judged. This point constituted “a major obstacle,” according to a senior American defense official.

The recent rout of the Iraqi army before the Islamists of ISIL is explained notably by the state of dissolution in which the United States has left the Iraqi army, as is explained on the blog of Col. Michel Goya, who currently directs the research bureau of the Force Employment Doctrine Center (of France) and describes the Iraqi “sand army”: “Despite its apparent volume, more than 300,000 men, the post-Saddam Hussein Iraqi Army suffers from multiple weaknesses … Its new reformation, under the direction of the Department of Defense, has been laborious … Still formed exclusively of volunteers (the idea of a conscripted army being able to bring together different communities was foreign to American reformers), badly paid and often absent from the ranks, this army has further lost much of its effectiveness with the end of the massive support of the American forces, badly replaced by private companies.”

Blackwater was renamed Xe Services in 2009, then Academi in 2011, and develops its activities under the protection of CEOs and foreign dignitaries. Upon arriving in power in 2009, the Obama administration has broken its contract linking the company to the State Department. Blackwater’s founder, Erik Prince, continues his capitalist adventures by creating aeronautical and security companies. He has today instead relocated his activities to Asia and the Gulf and has published, in November 2013, a book rehabilitating his private army: “Civilian Warriors: The Inside Story of Blackwater and the Unsung Heroes of the War on Terror.” Just so.