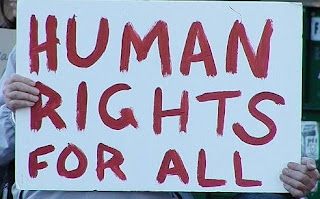 In a previous article, I spoke about the events in Ferguson, which have opened up the subject of America’s criminal actions toward the world, the Arab countries in particular.

Simply put, the events in Ferguson exposed America’s stance, its foreign policy and all the claims Americans have been repeating over the past years.

The events in Ferguson exposed America from all sides.

As we know, America gives a perception of itself as the primary defender of human rights in the world — and the [country] keenest on them — to the point where it gives itself the right to issue an annual report about global human rights and deliver accusations against various nations.

As all of us know, when it comes to the Arab countries in particular, America uses its institutions and its suspicious human rights organizations as a pretext for the blatant interference in the affairs of our countries. Not only this, the Americans have taken these issues as a pretext to back the sectarian and coup-supporting forces that want to spread chaos and threaten the country and society.

America has done this in Bahrain, Egypt and in most Arab countries. The events in Ferguson proved to the global community that the role America is playing in the world under the pretext of human rights is a suspicious and criminal one, and proves that America is not [privileged] to talk about human rights in the first place, let alone claim to carry the banner for defending them.

This is what American analysts and citizens themselves are saying today.

If America had any credibility when speaking about human rights, it would have focused all the more on the treatment of its black citizens and provided them with these rights.

However, the events in Ferguson have shown the whole world the truth, which the Americans know well: Their black citizens are suffering from injustice, racism and discrimination.

According to American analysts, these events have revealed that the conditions for black Americans suffering from discrimination and injustice have not improved much since the ‘60s.

What happened in Ferguson has exposed the nature of American advocacy: that American demands about ensuring and respecting the right of peaceful protest are hypocritical.

Here, too, we know what America has done in the Arab countries over the past years. We know about their criticism and about the demands they made in relation to respecting peaceful protests. We know about the unfair criticism that America has directed toward the police in Bahrain and Egypt, for example, as well as other Arab countries, under the pretext that the police were committing transgressions while dealing with the demonstrators.

However, in Ferguson, the American police did not hesitate one moment in dealing violently and brutally with peaceful demonstrators, in spite of all the reports that these demonstrations have not led to any transgressions against the police.

In dealing with these brutal events, the American police excluded neither citizens, journalists nor activists.

This is what the American police have done with peaceful protest demonstrations over the unjust killing of a teenage boy by the police. While Arab countries are facing sectarian groups, terrorist and coup-supporting forces who resort to violence and terrorism, America wants to protect these groups under the pretext of respecting the right to protest.

The major scandal, exposed by the events of Ferguson, has trapped American organizations working in the areas of human rights, civil rights, the rights of journalists and the like.

We know that over the past years these organizations have been spearheading the implementation of aggression and instigating schemes against our nations. Dozens of suspicious, unjust reports with alleged results from investigations were issued by these organizations on Bahrain, Egypt and others.

Now, where are these organizations when it comes to the events in Ferguson?

What is the stance of these organizations on police brutality against American demonstrators who suffered from harassment and violence?

Likewise, where are these organizations on the issue of the rights of black people in America in general?

We did not hear a single organization issuing a statement about the events, condemning the police or announcing that they intend to conduct an investigation into what happened.

Where is the suspicious organization Human Rights Watch? Why did it go totally silent and mute?

The silence of these organizations exposed them to the world and proved that their role is to target the Arab countries; their role is as criminal conspirator that has nothing to do with human rights.

The Egyptian foreign ministry issued a statement calling on America to show restraint and respect the rights of peaceful protesters.

However, a spokesperson for the State Department went on to say: “This is a domestic issue … When we have issues here in the United States, we deal with them openly and honestly and transparently.”

In addition, the American ambassador in Bahrain declined to comment on the events of Ferguson on the basis that it is an internal American issue.

If this is their attitude, then why do they give themselves the right to intervene in the internal affairs and issues concerning our countries?

Some might ask: Is America going to change the way it deals with our countries and stop its blatant intervention after the scandals exposed by the events of Ferguson?

The answer is: not necessarily. Rudeness and impudence are key attributes in American politics.