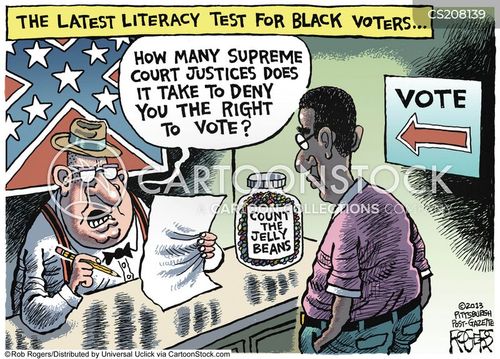 At the end of the American legislative midterm elections, it is apparent that the full effect of the reorganization imposed by the Supreme Court on campaign financing as well as on the equality of citizen voting has made itself felt for the first time. The result? Depressing!

Thom Tillis is a Republican who successfully ran for senator in North Carolina. He has on his side, dare I say it, that he epitomizes what so many of the candidates in his party and hundreds of thousands of extremists think about black people: social programs have been created in the guise of reparations for slavery. Because well … if it weren’t for those programs … hmm … the black person …

This penchant for racism in the southern United States has turned into a string of barriers erected by the elected, all Republicans, so that the poor, and therefore mostly black people by far, will find it more difficult to vote than during elections in the past. Unlike in the northern states, with the exception of Wisconsin, voters are required to have a photo ID. And what is the document of choice in this regard? A driver’s license. Yet it has been found, according to a recent study carried out by the Pew Research Center, that the net assets of an African-American household, being much lower than that of a white household ($5,700 versus $113,000), or even a Latino household, means that possession of a vehicle … We can guess the rest.

These barriers were erected by the nine southern states, known as the confederate states, the day after the June 2013 Supreme Court decision in which the highest tribunal in the country, dominated by justices appointed by Republican presidents, repealed the law on citizens’ voting equality by a vote of five to four. The majority’s argument? Society today is not like it was 50 years ago. For the record, it is worth recalling the conclusion that Gary Orfield, co-director of the Civil Rights Project, drew from a study of this issue: “Extreme segregation is becoming more common.” We agree: Segregation itself can be described as extreme.

With this in mind, we can make a connection with two other Supreme Court decisions and the racist tone they set. This is obviously the matter of campaign financing and not only of political groups. Last April, the high court removed the last barrier to limitations on the amount of money an individual can contribute to a party, a candidate or a certain number of candidates. In short, this means that the ceiling of $123,000 has been replaced by a fixed limit of $6 million. Three years ago, the court erased all the prohibitions that prevented businesses from plowing through political territory using millions of dollars. In both cases, the court has advanced the idea that any restriction on financing is contrary to the spirit of the First Amendment of the Constitution, which guarantees freedom of expression.

The overall consequence of these decisions has proven to be alarming because it contradicts the democratic spirit. Indeed, here and there, and in particular among the top advisers of both parties, it was observed that people or groups of people are on the brink of gaining as much influence as the parties, if this is not already the case. In this matter, the example of David Koch, who along with his brothers holds the greatest private fortune in the United States and by extension the world, is quite terrifying. According to a study done by FactCheck.org of the Annenberg Public Policy Center, the organization Americans for Prosperity, founded by David Koch and administered by veterans of the Reagan administration (a noteworthy fact), spent $125 million on the current midterm election campaign. This is a record sum for an individual or independent group.

It must be said that this stream of money has gone to candidates who espouse the ideas of the tea party, or who are libertarians, and not necessarily to “classic” Republicans. It is equally important to mention, and it is not unimportant when one knows how much the tea party and the libertarians espouse positions that inherently reject black people, that David and his brothers are the heirs of the co-founder of the John Birch Society in the 1950s, a group that distinguished itself from the Ku Klux Klan by including the aristocrats, if you can call them that, of racism. Finally, it is necessary to state that the acknowledged purpose of these acts and moves is the following: to eradicate the entire political heritage of Barack Obama, starting with his health insurance.

In Bob Dylan’s song “Masters of War,” the masters did not have names. Now they do.