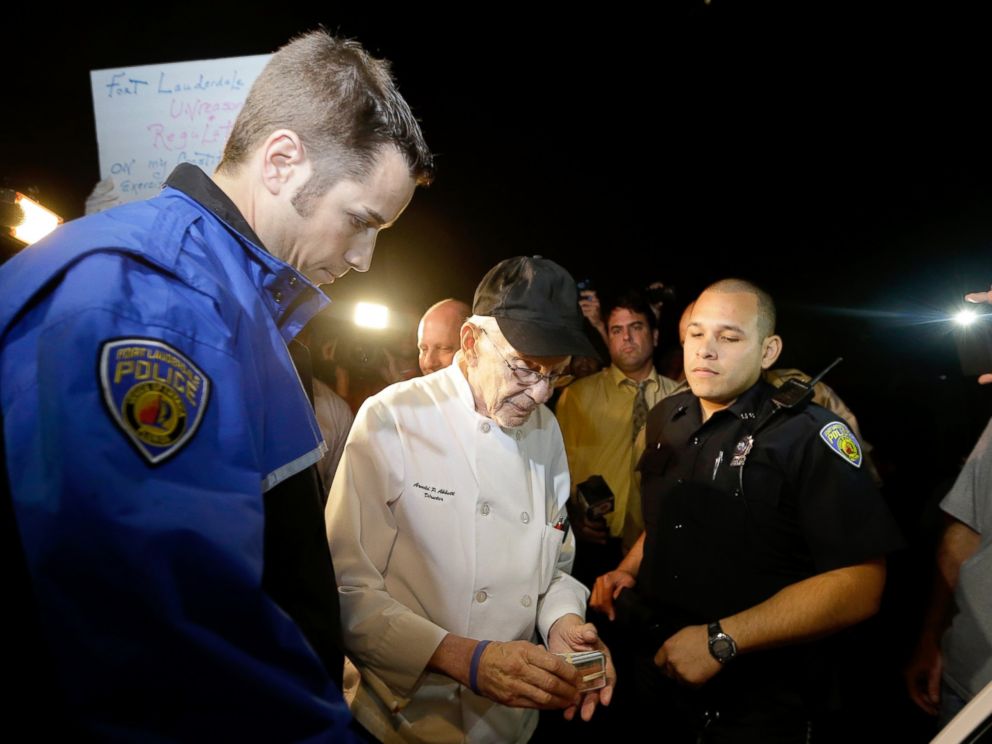 Who hasn’t heard of Fort Lauderdale? It’s a fairly large city filled with hotels and condominiums, located somewhere between Miami Beach and Jupiter on the eastern coast of Florida.

Fort Lauderdale recently joined the ranks of over 20 cities that have outlawed giving food to the poor in most public spaces. At least a dozen other American cities are planning to do the same.

A week and a half ago, 90-year-old World War II veteran Arnold Abbott, who has worked for the religious charity Love Thy Neighbor for years, was arrested along with two of the organization’s ministers while they were serving hot meals in a park near the beach. An officer exited a car with the revolving lights on and yelled, “Drop that plate!” The police were enforcing a new law that was adopted the previous morning at 3 a.m.

The arrested individuals face fines of up to $500 and even a 60-day prison sentence. But they said they’re ready to do it again. Other citizens have begun to flout the new laws, which will no doubt be challenged in court.

There are an estimated 10,000 homeless people in Fort Lauderdale, a city of 166,000 inhabitants. Until the beginning of November, it’s not too cold in big livable cities like New York, Washington or New Orleans, but once the “wind” arrives, some homeless people head south for Florida, where winters are much milder.

There are 634,000 homeless people across the United States, including 100,000 “chronically homeless.” These numbers have dropped over the past few years, but because of low wage levels and the weak social safety net, they remain high and include people with jobs.

There are several ways to limit the actions of charitable organizations that feed the poor. The most popular way is to forbid serving food in most public spaces or to apply very strict regulations on doing so. For example, in Fort Lauderdale, it is now illegal to do this within five hundred feet of a residence. That’s almost one and a half football fields! Some cities require a permit to run a soup kitchen, which is rarely free. Others force community groups to respect the same hygienic regulations that professional restaurants do.

As in most controversial situations, both sides have valid arguments. It’s true that the people living near parks have a right to tranquility. It’s also true that food served to the public needs to be safe. Free meals are in no way a comprehensive answer to poverty and homelessness, even if they are a part of the solution.

But outdoor soup kitchens’ opponents, like Fort Lauderdale mayor Jack Seiler, show little willingness to tackle the root cause of these social problems. Instead, their words demonstrate their intention to criminalize poverty and keep the poor as far away as possible — typical Nimbyism.

The arrests in Fort Lauderdale were covered by the U.S. national media. Some columnists reminded readers that billions were spent on advertising during the midterm elections. Others observed that similar sums would soon be spent on Christmas decorations.

Several charitable organizations linked to churches of various denominations stated that stopping them from helping the needy violates the first amendment of the U.S. Constitution, which guarantees freedom of religion. “Any human has the right to help his fellow man,” Arnold Abbott said on a television interview after his recent arrest.