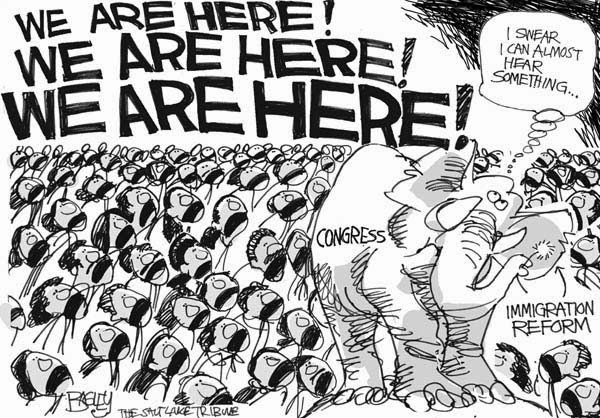 At the White House on the evening of November 20, the American president spoke of “the hypocrisy of a system where workers who pick our fruit and make our beds never have a chance to get right with the law.” Well spotted. Mr. Obama is not just giving his party electoral ammunition against Republicans — Hillary Clinton, the Democrats’ expected candidate for the next presidential run, endorsed the gesture — he is displaying the most basic sense of empathy for the millions of people who bring to American society and the American economy vital contributions that are far from limited to harvesting and housekeeping. Congress — handcuffed by the ultra-partisan objections of the Republican majority in the House of Representatives — should have set Mr. Obama’s plan in motion long ago.

The presidential reform certainly constitutes a step in the right direction. On the other hand, it absolutely is not a step toward opening the door to citizenship. There are 11 million undocumented immigrants in the United States, and many have been there for generations. Will the door ever be even half-way open? Also, Obama’s plan consists in particular of temporarily legalizing the status of the vast number of undocumented immigrants who have children born in the United States, or whose children have a permanent residency permit. This measure would prevent deportation procedures for some 3.7 million people who have been in the country for over five years, and would authorize them to obtain a valid three-year work permit. A second measure expands a program of temporary regularization launched in 2012 for the benefit of those who entered the United States when they were minors. Those who qualify will not be allowed to leave the country and then re-enter, and they won’t have access to federal health care aid — like Medicaid.

Not since the mid-1980s have such broad immigration measures been taken. However, this doesn’t exclude the possibility that when all is said and done, the reach of Mr. Obama’s preliminary measures will be limited. The 2016 presidential run is their specific window, which puts their value in perspective. Still, the president, acting boldly by over-ruling Congress, is offering an olive branch to the Latin-American minority whose influence is growing, particularly in the southern U.S., thanks to the Democrats.

In this matter, Republicans are thoroughly trapped — and talking nonsense. Texas Gov. Rick Perry argued that the measure would be an invitation to illegal immigration, but that’s an argument that doesn’t hold water in this case. Although Mexico — 60 percent of undocumented immigrants in the United States are Mexican — has serious security problems, the fact remains that as its economy develops, the northern flow of illegal immigrants is decreasing.

Some Republicans are keeping a low profile and betting that this peace offering will not rally the Latinos as much as the Democrats hope, or they are throwing up road blocks and discrediting themselves in the eyes of this minority. Continuing to build on their white, conservative electorate, they can still win elections, but it’s clear that they are becoming increasingly disconnected from the demographic and political evolution of American society.