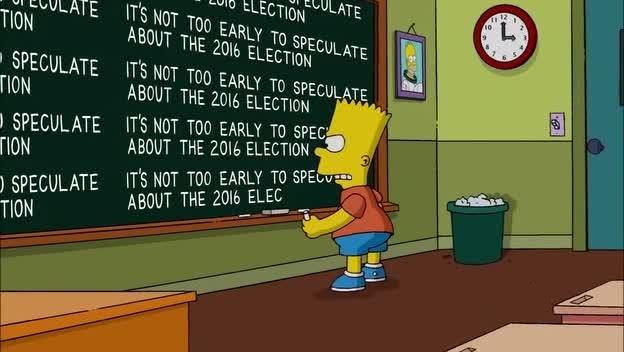 In the United States, electoral contests are ubiquitous, whether they are for the presidency, seats for the Senate or House of Representatives, or mayoralty. Thus, the moment a candidate wins an election, his opponents begin preparing for the next campaign.

In the American electoral contest, there are only two sides: Republicans and Democrats, despite the existence of independents and libertarians who are little more than an annoying dissident minority. Republicans are the right; Democrats are a multifaceted left — liberals, social democrats and some radicals. But all of them are within the frame of Western democratic republics and the rule of the higher law.

Republicans want to return to power after President Obama’s eight years at the helm. He had good intentions for his administration, but received little support from Congress. He had to face the alarming anti-Communist rhetoric of the tea party, where Republican extremists fled to. He also had to face an international agenda loaded with global challenges and several enemies.

But in the 2016 elections, there may be more than just two main dynasties. There are the Clintons, with Hillary, a moderate social Democrat with a realistic sense of economy and a lot of international experience; and possibly the Bushes, with Jeb, who is practical, Catholic, balanced, cautious, experienced as governor of Florida and married to a Mexican woman. He’s son and brother of former presidents — a whole Southern clan! — and seems like a very reliable option.

And there are Republicans with a Latin accent: 1) Ted Cruz, Catholic, of Irish-Cuban heritage, senator for Texas, a pro-active politician of long-winded speeches; 2) young Marco Rubio, Cuban-Miamian, who has a conservative-moderate posture regarding issues such as migration reform, tax payments and international politics. He’s seen as the prince of the tea party.

Who Else Will Join the Race?

It’s too early to risk mentioning names. Besides names, alliances and scandals that change the outlook always seem to arise. And despite women being in vogue, the “questionable” legacy of Barack Obama seems less viable for Democrats. They favor Hillary Clinton instead.

But if Republicans rise to fix the errors of the Democrats, is Jeb Bush really the best option? Would that confirm that clans are better? On the other hand, I don’t think that Marco Rubio is viable, at least for now. But he does have the makings of a politician. His time will come, if he knows how to wait and learn.

If neither of them nominates himself, wouldn’t it be perfect for Mitt Romney, after waiting eight bitter years silently watching the sand in Obama’s clock fall, to prove voters were mistaken?

For now, Latin options are fragile. WASP Americans won’t be very happy to try again with exotic minorities, after seeing Obama rise to power with the help of the lower classes. The U.S. is already entering an era in which internal conflict is as pressing as external conflict; and matters of external security are, in fact, close to home, threats where enemies multiply.

It’s a key moment of American interests. The dilemma is whether the country will try to recover its crestfallen leadership or surrender to the Chinese, which is why Washington wants to retake the leadership of an international stage, which it itself considers unacceptable. Western institutions are challenged and questioned by the new powers.

With the increase in Latin immigrants, and of other minorities, in the centers of the American machine, is Anglo-Saxon culture under threat? The fact that there’s an Obama, and that a Cruz and a Rubio might enter the fray would rekindle that challenge.

There’s the possibility of the system breaking if other forces rise. Who can tell that it won’t change at some point?

The American system never contemplated immigration coming from the south or the west, nor global cultural diversity, or extreme religious tolerance. Diversity in this frame of mind meant the Irish, Scottish, Dutch and Germans. And religious tolerance meant only variants of Christianity.

These constitutional precepts are over 200 years old. It’s a different time now. There are different challenges and threats. Principles also change.