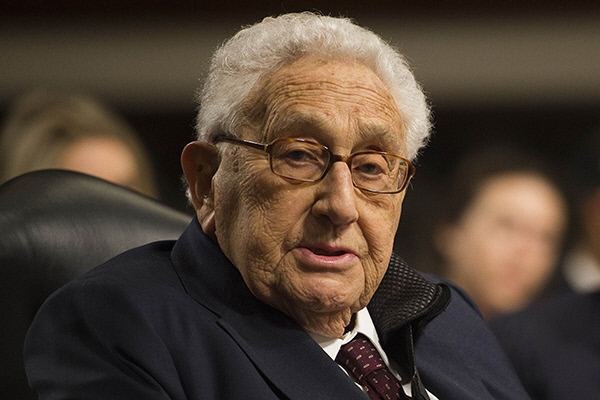 “[H]e’s one of the great statesmen of my lifetime” (Sen. John McCain) vs. “Kissinger is a Class A war criminal who ought to be prosecuted.” (Code Pink activists)

Former Secretary of State Henry Kissinger, now 91 and reliant on his cane, had to face these two contradicting evaluations of him during his attendance at the Senate Armed Services Committee on Jan. 29. Of course, people have paid more attention to Sen. McCain, the chair of the committee, who called the activists from Code Pink — a women’s anti-war organization — “low-life scum.” But the debate over Kissinger’s legacy was put in the spotlight yet again.

Medea Benjamin, the founder of Code Pink, issued a statement right after the hearing, saying “Henry Kissinger is responsible for the deaths of millions. He’s a murderer, a liar and a thug” and argued that he “should be tried at the Hague [ICC].” Benjamin criticized McCain on Alternet — a media website — stating “if Senator McCain was really concerned about physical intimidation [against Kissinger], perhaps he should have conjured up the memory of the gentle Chilean singer/songwriter Victor Jara.” Jara was one of the 5,000 who were detained and tortured in Chile’s National Stadium after Augusto Pinochet’s coup on Sept. 11, 1973. Jara’s nails were pulled out during the torture and the soldiers forced nail-less Jara to play guitar. Jara was later found dead in a street. Benjamin wrote, “[d]espite warnings by senior U.S. officials that thousands of Chileans were being tortured and slaughtered, then Secretary of State Kissinger told Pinochet, ‘you did a great service to the West in overthrowing Allende.”

Carl Gibson of US Uncut — an organization that led Occupy Wall Street back in 2011 — wrote an article on internet media Nation of Change, noting that Kissinger authorized secret bombing missions in Laos and Cambodia back in 1969 and 1970, killing 40,000 people, including the civilians who were not in any shape or form related to the Vietnam War. He criticized Kissinger, writing, “All Kissinger’s bombing campaign did was pave the way for the brutal Khmer Rouge to take over Cambodia, then use the B-52 bombings as propaganda to justify their cause, leading to more death and destruction.” He also wrote “Kissinger illegally bombed a sovereign nation that we never officially declared war on, destabilized its government and allowed a violent, autocratic regime to seize power. If that isn’t felony, I don’t know what is.” It was also Kissinger who visited Indonesia with President Gerald Ford in December 1975 to authorize the invasion of East Timor, which was vying for its independence.

Kissinger is a diplomatic realist and a living testimony to U.S. diplomacy. He served as national security advisor and secretary of state between 1969 and 1977, under the Nixon and Ford administrations. He himself has been claiming that his decisions were made in the United States’ “national interest.” The détente between the U.S. and the USSR, the secret talks with China for normalization; they were all in the U.S.’ national interest. Supporting the Chilean dictator, the secret invasion of Cambodia and allowing Indonesia’s East Timor invasion; they were all in the United States’ national interest as well. In that regard, he is the symbol of the two-faced entity that is American diplomacy.

The call for Kissinger’s indictment as a war criminal is not a new one. British writer Christopher Hitchens portrayed the dark side of Kissinger in his book “Trial of Henry Kissinger,” published in 2001. Code Pink has been criticizing the Obama administration’s military campaigns in Iraq and Syria, for its efforts to eradicate terrorism are seemingly unending. During the committee hearing, Kissinger stated that despite living in the dangerous days of terrorism, the rise of China and the Iranian nuclear threats, it still does not compare to the days of nuclear competition with the Soviet Union.