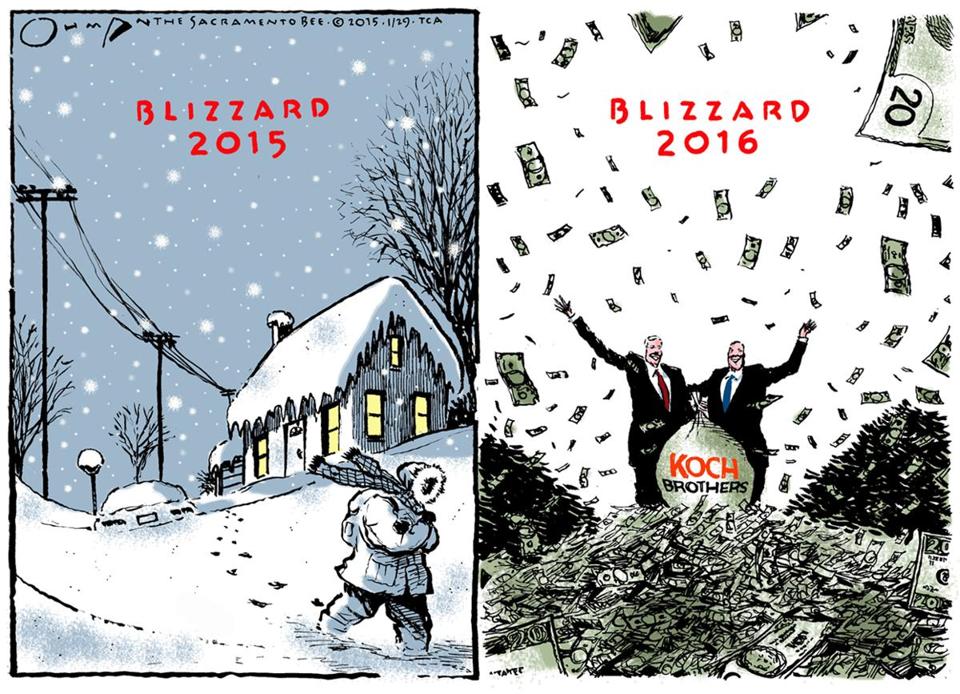 Charles and David Koch had invited the candidates to a forum. Scott Walker, governor of Wisconsin, Rand Paul of Kentucky, and Ted Cruz of Texas promptly followed up on the invitation at the beginning of the week. In Palm Springs, California, they promoted their ideas in front of a select audience. Again and again, the Republican hopefuls addressed themselves directly to the hosts. “Let me make myself perfectly clear,” Ted Cruz proclaimed to the listeners from the podium. “I admire Charles and David Koch.”

The Koch brothers could decide who will join the race as Republican candidates for the office of president of the United States in the coming years. At the event in Palm Springs, the industrial giants announced their intention to put $889 million into the upcoming election – the sum actually tops the $657 million that Republicans and Democrats invested together in the 2012 election. “With it they are fundamentally establishing an equivalent third power,”* says Viveca Novak of the Center for Responsive Politics, a liberal think tank in Washington.

Charles and David Koch are supported by around 300 other donors, who desperately desire a conservative man in the White House – a kind of “plutocratic politburo,” as The Washington Post wrote. In return for their enormous money gifts, they hope for lower taxes, deregulation, less environmental regulation, and weaker employee rights. The creed of the Koch empire reads: Washington should limit itself to the one task of protecting the rights of the individual – and otherwise keep to itself. Greenpeace formulates it as such: Above all, the Kochs support the laws that are directly useful for them, and fight the rest.

The Far-Reaching Network of Koch Heirs

The brothers, 74 and 79 years old, are known for their secrecy. Their private assets are estimated at about $81 billion; both are heirs of Koch Industries, the second-largest private firm in the country, according to Forbes. The corporation with headquarters in Kansas possesses oil refineries and pipelines, produces disposable cups, fertilizer and wood, and generates $115 billion in a year. For most Americans, however, the firm is not a household name. To this day, Koch Industries has not been listed on the stock markets; press inquiries usually remain unanswered.

The political influence previously took place through the wide-branching network of organizations that the brothers had built up over decades. The conservative Cato Institute, brought to life in the middle of the 1970s, is one of the most heavily cited think tanks in the country and an important mouthpiece for the political ideas of the brothers. The Mercatus Center, a Koch brother-financed research center in Virginia, is often depicted by Greenpeace as the “assault weapon for climate change deniers.”

Groups like Patients United Now or Sick of Spending, all parts of the so-called “Kochtopus,” fight against Social Security and a national health care system. Long have the brothers not only had influence and cash, but they have also had access to a giant and elaborate network of grassroots organizations. “They have created a parallel universe,”* summarized Viveca Novak.

‘We Are Finding Ourselves in a Kind of Oligarchy’

In the past, the Kochtopus had already stuffed money into the election, but most of the organizations are registered as nonprofits and lie outside the reach of campaign financing laws. Up to now, one could not fully determine how much money was flowing from the Koch empire into political channels.

Now the Koch brothers are showing their true colors. In the past weeks, they have appeared again and again in interviews and commercials, portraying the workers of Koch Industries under the title “We are Koch.” Last summer Freedom Partners, the in-house trade organization, started the first Super PAC, designated as a special political action committee in the U.S. One such lobby group permitted the Kochs to organize targeted fundraisers for political candidates and run adverts. As a consequence, the group was required to publish their budget of $25 million, and not only that: At the summit in Palm Springs, journalists were actually allowed to speak with the participants. “They have become a public political power,”* says Novak in light of the new offensive.

‘The Super-Wealthy Are Deciding Who Is Getting Elected’

The in-house initiatives are financing their own TV spots, storing and analyzing voter data, and wooing veterans, women, immigrants from South America, or young voters. Taken altogether, the Kochs could influence the Republican primaries, and even the race for the White House, says Rick Hasen, electoral law expert at the University of California at Irvine.

That puts the Democrats under pressure. They have traditionally been less tightly connected to big money as compared to the conservatives. Their donations come from many small donors, not from a few large ones. “The candidates are shrinking back from publicly seeking the collaboration with powerful financiers,”* says Viveca Novak. If Hillary Clinton, seen as the most likely Democratic candidate for the White House, wants to be successful, she will actually have to gather more funds than Barack Obama did for his campaign two years ago – the former record holder with over $700 million. But the Democrats warn that with money of the Kochs’ magnitude, one could neutralize every other vote. Lobby groups are currently planning to fetch up to $300 million for Clinton in the coming months.

Observers like Rick Hasen are also unsettled. “Meanwhile we are living in a world where the super-wealthy decide who gets elected and which policies are enacted,”* says the law expert. The influence of the economy is particularly strong with the Republican Party. “We are effectively finding ourselves in kind of oligarchy,”* according to Hasen. This oligarchy is steered from New York. The Washington Post dared a prognosis after the announcement of the almost billion-dollar cash donation: The next president, the paper wrote, will be “sponsored, supported, elevated, and outfitted by the Koch brothers and their friends.”

*Editor’s note: This quote, correctly translated, could not be verified.