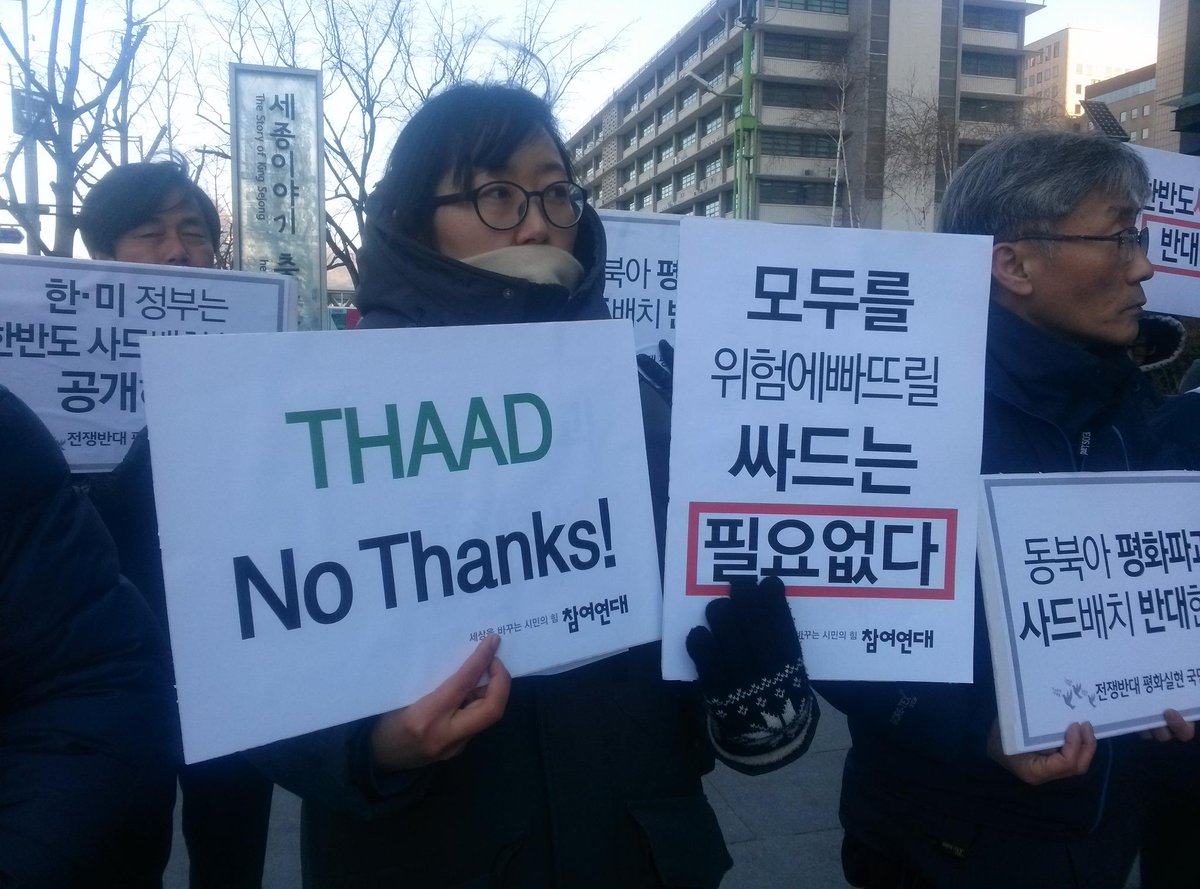 Recently, the debate surrounding the deployment of the U.S. THAAD (Terminal High-Altitude Area Defense) missile defense system has resurfaced within South Korea. It was a neat trick from the United States that kickstarted the controversial discussion once more. Seeing strong opposition to THAAD from China and Russia as well as considerable obstacles within South Korea itself, the United States suggested it would “consider” shortening the THAAD system’s long-range radar capabilities from its original 1800 to 2000 kilometer range to 600 kilometers, placing the majority of Chinese regions (along with their respective military deployments and missile launch capabilities) outside of the system’s reach. This has been done in the mistaken belief that it will lessen the degree of opposition from China.

The deception is transparent enough. [The United States] will first use this sleight of hand to install THAAD in South Korea. As to the range of its radar, it can be shortened or extended easily; can’t the question of whether it will be 600 or 2000 kilometers be changed with but a word from the Pentagon? [We] must let the United States know in no uncertain terms that no matter what form of snake oil it peddles, it will neither be able to obfuscate the true intent of its moves against China nor erode China’s position of determined opposition.

An editorial published in The Hankyoreh pointed out that South Korea joining one camp and intensifying the standoff will be of no help in finding a resolution to the North Korean nuclear issue or in laying a foundation for the unification of the Korean Peninsula — much less promoting peace in northeast Asia. The South Korean government must quickly discard the self-assumed hypothesis that obedience to the United States will guarantee its national security.

Chinese netizens have offered an even more incisive view: By deploying THAAD, what South Korea protects will be the United States homeland, while South Korea will only be putting itself in danger. If the great powers go to war, a South Korea without its own missile defense system will certainly become a target.

China is South Korea’s largest export market, and trade between the two countries has reached almost $300 billion a year, constituting approximately 2 percent of South Korea’s gross domestic product. Each year, approximately 8 million Chinese tourists travel to South Korea, bringing it an additional $10 billion to $20 billion in purchases. China and South Korea also recently signed a sweeping free trade agreement, widening prospects for developing trade between the two countries. If South Korea does not value all this and misguidedly believes that it can continue reaping a host of economic benefits from China even as it severely damages China’s security interests, it is no more than wishful thinking, as nothing in this world ever works out so perfectly. The decision that South Korea faces is this: It can profit from making the correct decision, or it will pay the price for its missteps. In other words, deploying THAAD in South Korean territory hurts both South Korea’s national security and its economic interests. One can’t have both fish and bear paw,* an old Chinese proverb that South Korea should understand.

The South Korean government should pay heed to the voices of wisdom and reason at home and abroad and, citing the need to protect its national security and the welfare of its people, unequivocally reject the United States’ request to deploy the THAAD system in South Korea and tell the South Korean people that to take any other course would be inviting not a single good, but a hundred ills.

*Editor’s note: This expression is the regional equivalent of “having one’s cake and eating it, too.”