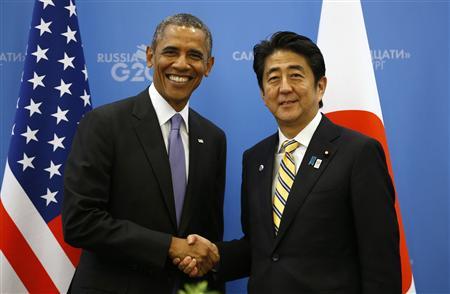 It has been confirmed that in the latter half of April, Japanese Prime Minister Shinzo Abe will give a speech to a joint session of the United States Congress. This is one of the highest honors the U.S. provides, but unlike South Korea, which has addressed a joint session of Congress several times, Japan has not had this type of opportunity. This is because of Japan’s legacy as a defeated power and host of war criminals in the aftermath of World War II. This clearly represents the historical importance of this occasion. Even former Prime Minister Junichiro Koizumi, a staunch supporter of the U.S.-Japan alliance, was prevented from addressing a joint session of Congress due to the protestations of U.S. veterans. In this light, this speech truly symbolizes the end of a 70-year period of lingering hostilities.

The reality of U.S.-Japan relations also reflects this conclusion. Japan’s participation in the Trans-Pacific Partnership (TPP), its opposition to the Asian Infrastructural Investment Bank (AIIB), and possible revisions to the Guideline for U.S.-Japan Defense Cooperation make its pro-U.S. stance all the more clear. Going beyond the joint development and operation of weapons systems, the joint operational command of military forces has been mentioned as a possibility. This new U.S.-Japan honeymoon has turned into quite a cozy relationship. Undersecretary of State Wendy Sherman’s comment, “It’s not hard for a political leader anywhere to earn cheap applause by vilifying a former enemy,” is turning out to be more than a mere slip of the tongue. The mainstream realist view of keeping China in check has led to growing cooperation and public statements, overcoming the historical differences between the two nations.

The South Korean Ministry of Foreign Affairs has been unable to actively respond to these critical changes. Prime Minister Abe’s speech symbolizes a disastrous failure. The excuse that Abe was invited by the U.S. Congress and not by the U.S. government shows that the current government does not realize the situation they are in. While South Korea still hangs on to the situation regarding comfort women, Japan has been meticulously working to move the U.S. Congress and administration. This is not to say that President Park Geun-hye, who has canceled presidential summits between South Korea and Japan, and her principled stance on the standstill issue of comfort women is without benefits. However, once a position has been chosen, results will follow. It is clear that in this case, South Korea has suffered a decisive blow.

This new U.S.-Japan relationship is a serious challenge for the South Korean Ministry of Foreign Affairs. The Park administration has to fundamentally review its strategy toward Japan to respond to the ever-changing dynamics of East Asia. However, looking at the process so far, it is unclear if the Yun Byung-se diplomatic team is the right fit for this task.