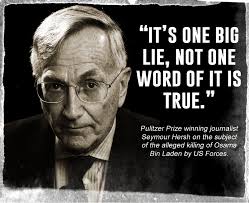 It turns out that the death of Osama bin Laden in a heroic Navy special operations forces action is a lie. Seymour Hersh, famous journalist and winner of the Pulitzer Prize, tells the story in the London Review of Books.

According to Hersh, Osama lived as a prisoner of the Pakistani Intelligence Service from 2006 on in a house with bars and iron mesh. He was also very sick and an invalid.

There was no “James Bond”-style operation. The U.S. was informed in 2010 by a Pakistani deserter who wanted the offered reward of $25 million.

There was no “Mission Impossible”-style assault. The U.S. coordinated with Pakistan to enter the house just prior to the removal of the Pakistani guards. Pakistani agents took the American commandos to Osama’s room.

Osama was simply executed. That is how Pakistan and Saudi Arabia demanded it be done, so bin Laden would not come out alive and reveal his links with the Pakistanis and Saudis.

In Germany, the newspaper Bild am Sonntag confirms what Hersh says with another fact. The German secret service had informed the U.S. that Osama lived as a prisoner in Pakistan.

Washington has a long history of lies. The Gulf of Tonkin incident was false, used as an excuse for the Vietnam War in 1964. The stories of death camps in Yugoslavia were false, used to mount aggression against the country in 1999. False were the claims of weapons of mass destruction in Iraq.

French espionage complained a little while ago that the U.S. falsified information about Ukraine to push more war in Ukraine. A real gem of truth, the United States is.