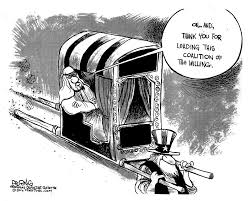 The U.S-led coalition will only be able to drive back the terrorist army of the Islamic State if it supplements its military actions politically and economically.

The U.S-led coalition can’t stop the advance of the terrorist army of the Islamic State. To be sure, the governments in Washington and Baghdad assert that they will soon drive the Islamic State group out of Ramadi again. But only a few believe that. In the last few days, thousands have fled the western Iraqi city in fear of Islamic State group atrocities and the impending battles. Both are reminiscent of the Kurdish city of Kobani that was almost completely destroyed after the recapture.

But they have also fled because they do not believe the promises of the politicians and military due to the fact that the defeat of the army in Ramadi is a setback for the U.S. and Iraq. For months, the U.S. Air Force and its allies have bombed Islamic State group positions in Iraq. In spite of this, after an offensive lasting only a few days, the jihadi were able to capture the strategically important provincial capital and raise their black flag over all government buildings.

One doesn’t have to be a prophet to predict that the battles will last a long time and many more people on both sides will have to die. It was clear from the beginning: A revolutionary movement cannot be stopped by military means alone. This is a lesson from other deployments in Afghanistan. At the beginning in the Hindu Kush it was also said that the international alliance would soon defeat the Taliban. Too many dead soldiers and civilians later, it became clear that there was no progress in Afghanistan until the international alliance established governmental, political and economic structures together with the Afghans. These results are still endangered; many consider them to be too small measured against the immense commitment of resources. Yet it becomes clear: The U.S. and its allies will only be able to drive back the Islamic State group if it supplements its military actions politically and economically.

Part of the success of the Islamic State group ultimately rests on the mistakes of its current opponents. The Americans demonstrated after the victory over the regime of Saddam Hussein that they are no specialists in building a nation. They have not been able to create a government in Baghdad together with the Iraqis while Sunnis, Shiites and Kurds collectively decide on the history of the country. Instead, the Shiites have secured more power in Baghdad and limited the influence of the Sunnis. Many Sunnis now support the radical Sunni Islamic State group.

The Islamic State group itself has created government-like structures in the territories it controls. It has named governors and judges. It has provided, to some extent, for electricity, drinking water and its type of education. Locally, the Islamic State group terrorists have shown that they are not just aggressive ideologues. From a Western point of view, all of that serves a false goal. After all, the Islamic State group wants to establish a caliphate that doesn’t have any human rights, in which there are no people of a different religion. Yet the affected Iraqis must survive in this environment. They cannot freely choose.

If the U.S.-led coalition does not change its strategy, a threefold division of Iraq approaches and the country will further crumble. The Kurds continue to dominate on the north, the Shiites in the south and the Islamic State group in the west. That however does not mean the end of the battle. Several Shiite militias already stand by the thousands in front of Ramadi where they are expected to take back the city along with the Iraqi army.

The European Union could participate in a change of strategy. Yet after the adventure in Afghanistan, neither the will of the governments nor the respective populations of EU member states are especially keen on allowing themselves to be drawn into the conflict in Iraq all that much. Germany and its neighbors are primarily concerned about their own security. They want to prevent European jihadi from traveling to Iraq and returning radicalized.

Something similar applies to Syria, which has already been crumbling for some time now. The Assad regime controls the south, and the Islamic State group controls the north of the country. In between, both fight against other insurgents. International politics has long since taken leave of this conflict after Russia and China blocked a possible intervention by the U.N. a few times.

All in all this is not good news – neither for the people in the region nor for international politics which has not found a satisfactory answer. The latter causes fear of something bad for other conflicts like in Nigeria.