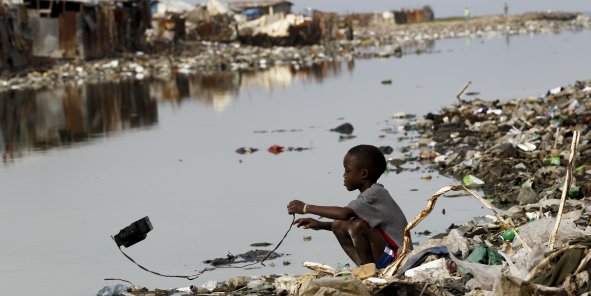 Five years after the earthquake that devastated the island, causing the death of tens of thousands of Haitians and leaving hundreds of thousands without treatment or shelter, The Guardian newspaper is speaking of 60,000 Haitians still living in tents. ProPublica and NPR’s investigative websites have revealed that the American Red Cross is responsible for failures on the ground.

After the devastating earthquake in 2010, the American Red Cross raised nearly half a billion dollars to provide aid in Haiti. But according to an inquiry published by investigative journalism sites ProPublica and NPR, the organization is responsible for a “string of failures” on the ground and heavily exaggerated the amount it allocated for the country’s reconstruction. As such, although the organization stated that it provided housing for more than 130,000 people, only six permanent houses are said to have really been built.

“Humanitarian organizations the world over have found it difficult to help Haiti, but the Red Cross is directly responsible for the majority of its failures”, says the newspaper. * It’s difficult to wash your hands “when people had no access to water and no soap.”

At the end of 2011, a big revitalization project was launched in the Campeche neighborhood in the heart of Port-au-Prince, the capital. The program was called, “A better life in my neighbourhood,” and provided for the construction of several hundred permanent houses. However, according to ProPublica, “today, not one home has been built in Campeche. Many residents live in shacks made of rusty sheet metal, without access to drinkable water, electricity or basic sanitation.”

A large measure of the failure is due to expertise in construction projects and the absence of concrete improvements to the quality of life. For example, the Red Cross preferred to launch campaigns to raise awareness of hand washing, but internally these measures were eventually judged “not effective when people had no access to water and no soap.”

“They collected nearly half a billion dollars,” said a government officer who helped oversee Haiti’s reconstruction. “But they had a problem. And the problem was that they had absolutely no expertise.”

The Red Cross states that all the NGOs present in Haiti are confronted with difficulties, largely due to a dysfunctional land title system.

The group defended itself, stating: “like many humanitarian organizations responding in Haiti, the American Red Cross met complications in relation to government coordination delays, disputes over land ownership, delays at Haitian customs, challenges finding qualified staff who were in short supply and high demand, and the cholera outbreak.”

The investigation carried out by ProPublica and NPR confirms that other organizations have met the same difficulties, particularly in terms of land disputes, but “it wasn’t just that Haiti is a hard place to work,” since other organizations, which raised far less funds, are still said to have managed to build 9,000 homes.

The “Group’s Image” an Essential Parameter for the Red Cross

For example, when it states that it has provided homes to more than 130,000 people that actually included thousands of individuals who have simply been “trained in proper construction techniques.”

In its promotional materials, the Red Cross claims to have helped “more than 4.5 million” Haitian citizens “get back on their feet,” without, however, providing any proof of this. Jean-Max Bellerive, Haitian Prime Minister at the time of the earthquake, doubts this figure as the country’s total population is only about 10 million people.

This Friday, the Red Cross was anxious, all the same, to explain itself in a press release. It stated “that they have used other methods to improve the daily life of those affected, and that donations have allowed them to build eight hospitals and clinics, stem a cholera epidemic, provide drinking water and sanitation, and repair roads and schools.”**

For its part, the Thomson Reuters Corporation has learned that at least 17 percent of funds collected for Haiti were spent on operating costs, while the American Red Cross and the International Red Cross state that for each dollar raised, 91 cents must be devoted to the humanitarian mission.

*Editor’s Note: This quote, although accurately translated, could not be exactly verified.

** Editor’s Note: This quote, although accurately translated, could not be exactly verified.