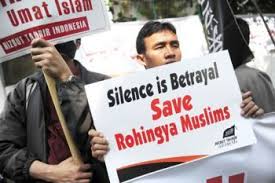 President Obama has told the Myanmar government to take steps toward ending discriminatory treatment against Muslims. President Obama also announced financial aid for the Muslims who are currently being victimized.

The U.N. and the American president have expressed concern several times over brutalities against the Muslims of Myanmar. They have also cautioned the Myanmar government several times to protect Muslims and recognize them as citizens. However, no reduction in incidents of torture of Muslims has taken place in three years. Thousands of Muslims have been brutally murdered; hundreds of thousands have been forced to abandon their homes. No Muslim in Myanmar is safe today.

The U.N. and America restrict themselves to mere lip service. The scope of life has tightened for Muslims based on the intentions of the Myanmar government itself. If the U.N. and America were to impose sanctions on Myanmar, as they did on Iran, until Myanmar provides protection to Muslims and ensures their rights, the attitude of the Myanmar government could be straightened out.

The Muslim world, too, needs to take notice of what is happening. The silence of Muslim countries in response to the unwarranted injustice against the Muslims of Myanmar is no less than a crime. Pakistan, too, needs to play its role. We are providing hospitality to Afghans without deriving any benefit for ourselves. We have taken responsibility for the sponsorship of Biharis in Bangladesh. Why are we standing by and watching silently as the Rohingya Muslims are ground up in the mill of injustice?