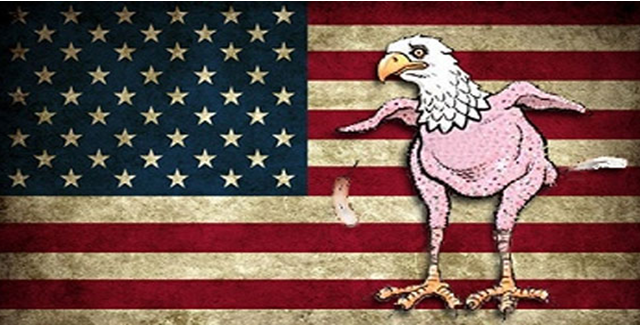 As you know — since you don’t have the right not to know because everyone is making it known with drums, trumpets and all the fanfare — growth is coming back. What am I saying? Growth is back. Growth is there, prodding us from every corner. Ah, this holy growth … and this economic recovery, my friends … yes this lightning-fast recovery that began in the U.S. and crossed the Atlantic like the slender vessels in the America’s Cup.

But here we go! Nothing other than kerplunks! Even the official statistics are forced to finally admit the unthinkable, the unimaginable, the inconceivable, the incredible. Ultimately, not only is there no growth in the USA, but the U.S is in recession.

“A possibly temporary contraction of the U.S. economy”: I must admit I burst out laughing while reading this article by le Figaro, which no longer knows what to do in order to willfully raise your morale.

The use of the word “contraction” to avoid talking about recession. “Possible” because, between you and me, there has been no growth since 2007 in the USA – Le Figaro just invented the “possibly temporary” period that goes on. But well, once again, what is important is your morale my dear lady (or my good sir, except that the mind control police would burst in to arrest me on the charge of anti-feminism).

I know how to raise your morale. We need special forces working against pessimism. Yes, similar to the squad implemented to counter Internet-based hate, but the problem is not to fight hatred. No, we agree here. Despising one another is either bad or not good (even here there are nuances), but loving one another can be difficult sometimes, too. What we do know is that love cannot be decreed, even if it’s Manu* who passes the degree quietly at night.

No, the problem is to define what hatred is … precisely. Without a precise definition of hatred, we will find ourselves in an arbitrary totalitarian situation, with the pure and simple creation, in an official manner, of a thought police.

In short, I am counting on our comrade Manu to force us to believe in the recovery, even though we do want to because those who do not believe in the recovery are comitting a hate crime against French economic interests. Besides, it’s obvious that with these kinds of laws, we’ll get closer. How did it go? “On va s’aimer!”**

However, even in the U.S. there is no growth but a recession, and that’s not because we said so, as was reiterated many times. So, imagine how France is doing.

“In lieu of a positive growth of 0.2 percent, as initially announced, the U.S. GDP contracted by 0.7 percent (annualized) in the first quarter of 2015.”

Yes, in the first quarter of 2015, the U.S. was therefore in recession. Well, that’s normal; it was a cold and snowy winter, and there were also a few strikes. All in all, nothing to worry about.

We can come up with all the excuses we want. The reality, the sad truth, is that a healthy and real growing economy can face a bit of cold without spiraling down in recession.

A healthy and real growing economy can face a few strikes.

A healthy and real growing economy can face contingencies.

If at the slightest meteorological, technical, economic, social or oil challenge, an economy as big as that of the U.S. can plunge into recession, then this economy is not healthy. It’s as simple as that.

It’s already too late, brace yourselves.