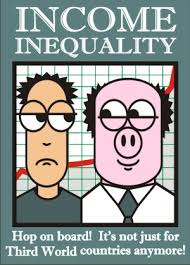 As Europe becomes Americanized, the United States is becoming more European. While in Europe the debate is focused on competition, inequality is at the center of the American political debate. In the U.S., there is a strong movement to raise the federal minimum wage, currently situated at a miserable $7.25 (6.51 euros) per hour. The city of Los Angeles has led the way, deciding to raise the minimum wage from $9 to $15 per hour, basing the decision on simple reasoning: If two adults working full time for minimum wage cannot lead a decent life and care for their children, providing them with housing, health and education, then the minimum wage has become a covert subsidy for business. So, the state has to massively intervene with costly social politics in order to not only get those who do not work out of poverty, but those who do work as well. We are not only talking about the United States. In four countries in the EU (one of them is Spain), it is necessary to work more than 70 hours earning minimum wage in order to escape the threshold of poverty.

Low salaries, we tend to say, imply high competitiveness and thus increased growth, while high salaries are an obstacle for a well-working economy. However, what explains how McDonald’s and Burger King can sell hamburgers in Denmark paying $21 per hour, while in New York, their employees only make $9 per hour?

Inequality should worry us for many reasons. On the personal level, it is unjust, as it truncates the lives of people who can neither achieve their goals nor give their children a decent life. On the political level, the extreme difference is that wages are incompatible with democracy. For as much as the right to vote has an equalizing effect on the access to the political system, the richest will always be more able to have the system work in their favor than the poorest. Also, on the economic level, inequality is inefficient, as it makes it necessary to devote substantial resources to alleviate poverty instead of promoting education and innovation. If inequality is unjust, threatens democracy and hurts the economy, why do we talk about it so little?