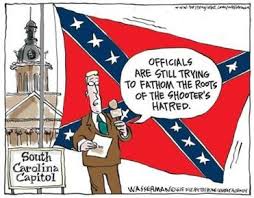 Dylann Roof took care to spare one member of the congregation at Emanuel Church so that she could tell the world all the details of his hate crime, including this racist delusion which came from his own lips: “You rape our women and you’re taking over our country, and you have to go.”

Be that as it may, the day after the shootings in Charleston, some elected representatives and American media outlets are going to great lengths to ignore the nature of the hatred which pushed a 21-year-old white youth to kill nine black people.

Nikki Haley, governor of South Carolina, wrote on her Facebook page, “We’ll never understand what motivates anyone to enter one of our places of worship and take the life of another.”

The Fox News morning show “Fox & Friends” summarized it as an “attack on faith” on a ticker at the bottom of the screen.

Dylann Roof seems to have provided details of his racist tendencies in a manifesto which has been discovered on a website registered in his name, and where dozens of photos of him have also been published. The author of the unsigned text sets out his hatred of black people, who, according to him, represent “the biggest problem for Americans.” And he justifies his choice of Charleston as the scene of his crime, because “it is the most historic city in my state, and at one time had the highest ratio of blacks to whites in the country.”

“I have no choice,” he writes of his murderous project, before adding, “We have no skinheads, no real KKK. Well someone has to have the bravery to take it to the real world, and I guess that has to be me.”

In many photos published on the website, Dylann Roof brandishes the Confederate flag, the flag of the slave-holding states during the Civil War. In other photos, he spits on the American flag, or burns it.

So, five days after the Charleston shooting, even Fox News can no longer ignore Dylann Roof’s true motivation. But the denial of racism by some Americans is evident in another related debate. What meaning should be given to the Confederate flag which still flies in front of the South Carolina State Capitol, and which decorates the license plates of some automobiles in America’s southern states?

Dylann Roof obviously sees it as a symbol of white supremacy, just like critics of the “Stars & Bars.” The critics are calling for its removal from the public square in Columbia, South Carolina’s capital, where it has flown since 2000, and where it flew above the dome of the State Capitol before that.

For its defenders, this flag does not symbolize slavery or racism, but is seen as a symbol of a cultural heritage and pride in the spirit of the South.

But is it really possible to disassociate this flag from the supremacist ideology which inspired the Confederate states?

“Our new government is founded upon exactly the opposite idea; its foundations are laid, its corner- stone rests, upon the great truth that the Negro is not equal to the white man; that slavery subordination to the superior race is his natural and normal condition.” Thus said Alexander Stephens, vice-president of the Confederate States of America, on March 21, 1861 in Savannah, Georgia. Exactly 100 years later, the Confederate flag appeared above the dome of South Carolina’s State Capitol. At that time, it symbolized the state segregationists’ opposition to the Civil Rights Movement.

How can we now refuse to recognize that this flag is intimately linked to the darkest chapters in the history of America’s southern states, including those written just last week?

“The past is never dead. It’s not even past,” wrote the celebrated Southern literary figure and novelist William Faulkner in “Requiem for a Nun.”

This past presents a contrast which is all the more striking in Charleston. One of the most important streets in this elegant city bears the name of John Calhoun, who, before the Civil War, was vice president of the United States and a South Carolina senator, among other offices. A great theorist of Southern ideology, Calhoun notably defended slavery, not as a “necessary evil,” which was the popular opinion of his age, but as a “good thing,” both for whites and blacks.

And it is on the road bearing his name, in Charleston, that Emanuel African Methodist Episcopal Church is to be found; a church which is emblematic of the fight against slavery and is now the target of one of the worst racist shootings in American history.

It is impossible to drive past today without feeling the weight of history.