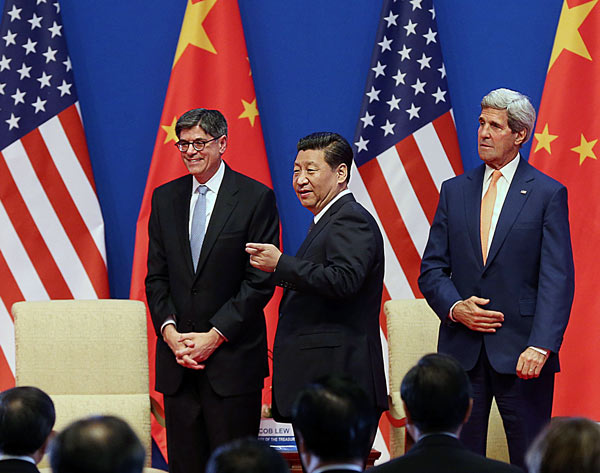 On June 23 and June 24, the seventh round of the Strategic and Economic Dialogue between the U.S. and China took place in Washington, D.C. Concurrently, the sixth round of high-level cultural exchange talks also commenced. On the eve of the discussions, the fifth U.S.-China Strategic Security Dialogue also began. In preparation for the dialogues, a number of senior officials from the U.S have visited China in succession over the past several months. Acting as liaisons for the Chinese were three delegates: Vice Premier Wang Yang, Vice Premier Liu Yandong and State Council Member Yang Jiechi. In America, three noted publications respectively published popular articles, the focal point being (the authors’) hopes and opinions about the dialogues, exchanges and collaborations. Therefore, it is plain to see that both sides have placed tremendous value on this round of talks and the conclusions that can be drawn from the negotiations.

Through this process, due to working relationships, this author has experienced what it is like to stew over the preparations for these talks and to be on pins and needles when they actually begin. I have experienced firsthand the importance of the role the aforementioned dialogues play in the relations between our two countries. For a decade, Sino-American relations may have experienced a lot of bumps, but the mechanism for discussion has always remained consistent, and the topics have broadened, the discussions have deepened, and the gains have been more plentiful.

Something New Is in Store for U.S.-China Dialogues This Year

Firstly, this September, President Xi Jinping is going to make an official state visit, with the core task of this dialogue being to make preparations and pave the way for the talks. President Xi’s visit to America is a matter of paramount importance, as our two heads of state will once again have an open dialogue about strategic matters after the California meeting in 2013 and the 2014 Beijing Center talks in Yingtai. Through this round of dialogues, the two parties will likely reach a consensus in terms of important areas of cooperation — if the talks are to bear fruit and be surrounded by a positive, collaborative atmosphere.

Secondly, America is drawing gradually closer to election time, which is the background surrounding the next phase and cannot be avoided. This round of talks needs to make its own contribution to the stability of U.S.-China relations during election time. Over the past decade, during every election or midterm, U.S.-China relations have inevitably become bogged down by the rhetoric of elections, which often takes the form of publications by special interest groups in [the U.S.] that are trying to promote an agenda that implicates China in some way — which to a certain degree has had a negative impact on bilateral relations. Both sides should uphold the dialogues and do whatever it takes to avoid exerting pressure on the other through mudslinging in the media.

Thirdly, the dialogues are a source of new innovation that add new issues to the agenda, like a river’s torrents rushing out to sea, filling U.S.-China relations with new vitality. For example, both sides are going to open a dialogue specifically meant to address the issue of maritime security. The ocean belongs within the realm of new international territory. Both China and the U.S. are maritime powers, and America is actually a maritime superpower. For the past several years, China has put forth maritime strategies that will increase confidence and dispel suspicions through bilateral dialogues, and in the meantime ensure each nation’s oceanic interests, essentially making contributions toward the ethical protection of the sea for the benefit all of mankind. Both sides will conduct discussions about issues such as technology and innovation, green ports and shipping, as well as how to crack down on the illegal trade of wild animals and plant life.

Fourthly, advancing old issues to bring forth new developments will take both nations to new heights in vital areas of cooperation. For instance, a great consensus was reached on the issue of global warming. The heads of both nations published a joint declaration on climate change, thereby underscoring the fact that through these dialogues, it is quite possible to resolve thorny issues that have divided our two nations. Both states are considering how to strengthen their collaboration, and are striving to reach an agreement at the [United Nations] Climate Change Summit in Paris. Additionally, during the past several rounds of dialogues on issues like energy, investment and Asia-Pacific security, both countries have come to constructive agreement. This round of dialogues will serve to build new developments atop the already existing foundation, bringing about new benefits and new gains.

Of course, the central mission of the aforementioned dialogues is to negotiate and assure the direction of the development of U.S.-China relations. To guarantee the forging of [positive] trade relations, a cornerstone must be laid to stabilize the two countries’ trade, and to advance the search for an effective stabilizing pillar with which to correctly manage certain issues like bilateral estrangement and avoid the head-on conflicts that often occur when sailing through stormy seas. U.S.-China relations should be patterned after the old Chinese adage, which says, “When a melon ripens, it falls off the vine by itself;”meaning, all problems will work themselves out with time.