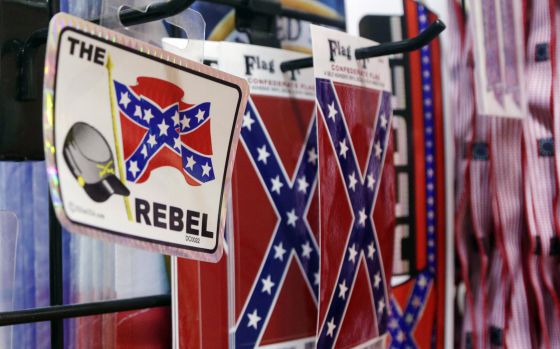 It is a flag that was hardly spoken about in the United States beyond local controversies or when seen frequently on T-shirts and cars in the South. However, the racist killing in Charleston has incited a debate about the Confederate flag of the old southern states that supported slavery, a debate which has begun to advance a chain of changes.

The controversy over the small Confederate flag — a blue cross with white stars over a red background — that flies in front of the Capitol in South Carolina’s capital, Columbia, has become the most intense exhibition of rejection of the white fundamentalism of Dylann Roof, 21 years old, who killed nine blacks in a historical African-American church in Charleston last Wednesday. In photographs posted on the Internet, Roof is seen with the Confederate flag and a pistol.

The day after the governor of South Carolina, Republican Nikki Haley, changed her mind and asked state legislators to approve the removal of the flag, which they began to debate on Tuesday, the controversy spread to other former Confederate states that fought against the Union in the American Civil War (1861-1865). Overall, the stance against the symbol grew stronger in the political arena.

In Mississippi, the only state that continues to officially use the Confederate symbol, which is incorporated into its state flag, the voices asking for the symbol to be removed grew. Among these was that of the speaker of the House of Representatives.

The Virginia state government — whose capital, Richmond, was the capital of the Confederation — announced that it will prohibit descendants of Confederate soldiers from displaying the flag on their license plates. The same decision was made by Texas in 2011 and has just been approved by the Supreme Court.

In a similar fashion, large businesses have begun to distance themselves from the flag, conscious of the possible impact on their reputations. Walmart — the largest commercial chain in the United States and founded in the southern state of Arkansas — Kmart, and Sears, as well as the online giants Amazon and eBay, announced that they will drop the sale of flags and products related to the Confederate flag of discord.

Google decided that ads to sell Confederate products will not appear in searches, as it “violates” its advertising policy prohibiting “content that’s generally perceived as expressing hate toward a particular group.” Additionally, one of the main U.S. flag manufacturers, Valley Forge Flag, announced that it will stop producing Confederate flags.

At the same time, however, an increased interest in the flag has been noted, reflecting the polarization of the debate. Before being interrupted on Tuesday, the sale of the most popular Confederate flag on Amazon had increased 8,800 percent within a 24-hour period.

The flag is offensive. The decision to support or reject it has upset various politicians, especially in the Republican Party, which, since the end of racial segregation in 1964, has created a region in the South that appeals to white, conservative, rural voters. The Confederate flag is a symbol that makes the South look at itself in the mirror; it brings together racial trauma and the challenge to remember an uncomfortable past.

Detractors identify the flag with all of the bad associated with the South: the slavery that reigned until the Confederate defeat in the Civil War; the lynching of African-Americans until well into the 21st century; the racial segregation against blacks until half a century ago; and the white fundamentalism of people like Roof and groups such as the Ku Klux Klan, which remain active in parts of the country.

Those in favor of the flag, on the other hand, consider it part of their identity and a historical legacy, independent of its racial connotation. It is a tribute to close to 480,000 Confederate soldiers who died during the Civil War. Many towns in the South have streets and monuments with the names of war heroes who fought against the end of slavery.