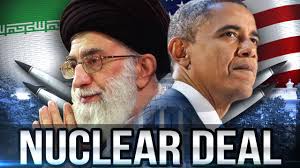 It’s got an antiseptic name, but it’s highly controversial: the Joint Comprehensive Plan of Action. It’s the agreement between the United States and Iran concerning Tehran’s proposed production of nuclear weapons. It was backed by large countries in the region: the U.K., France, Russia, China and Germany.

Israel, of course, was up in arms about it. If Iran develops nuclear weapons, it’s all over. Iran already has a rocket capable of destroying the country with a surprise attack. Iran doesn’t seem to care about the 1.5 million Arab-Israelis that would die in such an attack. Islam promises its martyrs a glorious life in heaven.

An exaggeration? That’s what the ayatollahs assure everyone over and over. Eighty years ago, many Jews didn’t believe what an energetic idiot with a ridiculous mustache had written in “My Struggle” (Mein Kampf). He ended up killing 6 million Jews and erasing forever a flourishing Jewish Europe.

But Israel isn’t alone. Two hundred retired North American generals, admirals and vice-admirals just signed a letter asking U.S. congressmen and senators not to support the deal. They’re not doing it just for Israel. They have the interests of the U.S. and its allies in mind. Their arguments are emphatic. They’re convinced that Iran will not comply with the agreement. They say that you cannot let a country self-inspect its own production of nuclear bombs and that the plan gives Iran access to billions of dollars, some of which will go to subsidizing Hezbollah terrorists. They think it will turn the Middle East into a more dangerous place than it already is, sparking a nuclear race with other Arab states.

Interestingly, the great Ayatollah Seyed Ali Jamenei (Ali Khamenei) gave them good reason to believe this. While announcing the agreement, he affirmed that Iran would not change its views. Destroying Israel would continue to be Iran’s sacred and permanent objective.

Of course, not all U.S. military officials hold the same opinion. Two weeks ago, three dozen high-ranking ex-officials asked Congress to support the deal Barack Obama and John Kerry made with the ayatollahs.

They argued that the agreement limited the chances of conflict and that any noncompliance on Iran’s part would be detected. It was the best deal possible in the imperfect world of international relations.

Those who support the deal seem to be countering the nationalistic tendency of the U.S., where many theorists have claimed that the enormous country of 310 million should not allow the dangerous conflict with Israel, nor any other conflict in the world, to be dragged out any longer.

In either case, why have Obama and Kerry pushed this deal forward? Judging from Kerry’s comments to Reuters, it’s because they want to save the U.S. from the sentiments of hate that their policies spark in the Middle East.

They want the United States to be loved and admired, and they don’t like people’s rejection of their country.

They probably, like many North American critics in the academic world, share a certain shame for Washington’s record of conduct in international affairs.

In reality, Obama and Kerry have fallen into the trap of believing that the intensely widespread and exhaustive propaganda accurately reflects public opinion. Iran’s seemingly endless anti-American campaign projects the views not of society as a whole but of a small, loud-mouthed elite that uses “anti-Yankeeism” as a tool to distort reality.

Maybe when Kerry was protesting the Vietnam War — which he fought in — or when Obama was a community organizer, they inherited some of the embarrassment for American conduct abroad, like Noam Chomsky or the late Saul Alinsky. Although this view is largely shared among elite college professors and is a mark of left-wing identity, it is not the way the bulk of the international community views the U.S., especially the men and women struggling to get by.

The objective reality is that the U.S. is one of the most admired countries in the world, one where half the world’s poor want to live, as revealed by Anholt-Gfk Roper Nation Brands’ giant annual survey (they surveyed more than 20,000 people in 20 countries of significance.) In the indexes they’ve compiled, the United States headed the list of the 10 most desired countries until 2014. It’s now second with Germany having risen to number one. The others are the usual suspects: England, France, Canada, Japan, Italy, Switzerland, Australia and Sweden.

That’s the truth. The rest is illusion. Sleight of hand.