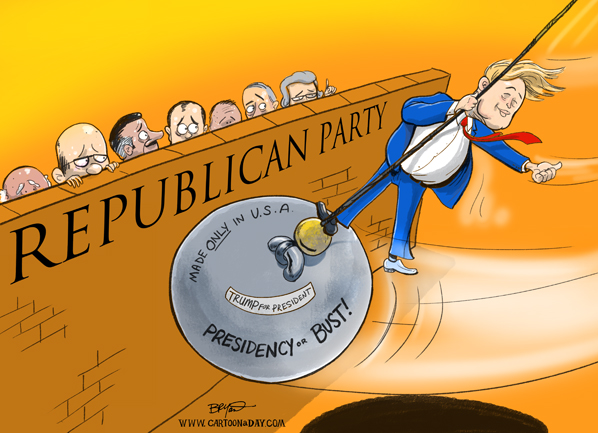 It could have been expected that the second televised debate among the Republican presidential candidates would turn into a fight of everybody against Donald Trump. His sovereign lead among Republican voters in the polls (32 percent), and the growing overall support for the unorthodox billionaire left no other choice. Trump is an easy target, since his American common sense truisms have nothing in common with the sophisticated policy of the president, who has influence over world events. And so everyone who thinks the least bit in terms of policy stands out against Trump as a politician/intellectual. Candidates haven’t played to political wisdom in pre-election campaigns in a long time; charisma and the ability to react quickly are what win; selling oneself and standing one’s ground. And this time as well, Trump has led by miles in this area.

The lone woman among the Republican candidates, Carly Fiorina, best described Trump: He’s just an entertainer. It’s enough to watch the clips of Trump’s speeches in both debates and the ensuing outbursts of laughter in the audience to see that it’s clear Fiorina is right. Trump also combined a program of homespun aphorisms and promises — which by its simplicity attracts even voters who have lost all love for politics — with this light tone and with his humor and impertinent candor, which many find disarming because it closes the distance between the politician and the voter. They even know, all of sudden, that “Yes, We Can,” only differently and in a “more American” fashion than Barack Obama knew it way back when. Republicans, and along with them all of America, are struggling with an eccentric billionaire’s populism, whose magic seems invincible.

Thus far, the greatest weapon against Trump have been reminders of the failures of his companies. Four bankruptcies — that’s a fitting business record, which the current favorite of the Republican primary race doesn’t like to hear. It’s clear that precisely this “battering ram of the past,” in which “Trump’s creditors lost millions of dollars,” as the debate moderator pointed out, will be the main weapon against Trump.* If it’s endlessly repeated, it can’t be ruled out that voters will hear the message and begin to doubt whether Trump, with his business ethics and pragmatism, will actually succeed at opening the simple path to restoring American greatness that he promises.

This time, arguments won’t be determinative, but rather the duration of enthusiasm and trust. If Trump’s rivals hold out, even expert preparation from political advisers won’t help them. Only time will help — that is, how fast Trump’s (c)rude frankness will wear thin, and voters will realize, like Fiorina, that it’s nothing but a show. But American political blindness can last a lot longer. If Trump’s fun and games can entertain people for this long, even the unbelievable — Trump in the White House — could become reality.

*Editor’s note: These quoted phrases, while accurately translated, could not be independently verified.