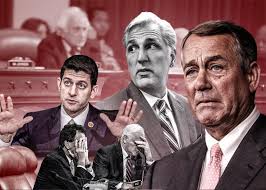 America’s conservatives are failing spectacularly to elect a new speaker for their House of Representatives. The position is thankless because the tea party ideologues refuse to cooperate with anyone.

Jubilation in the right wing. Not only because the far-right wing conservatives in the House of Representatives have forced the resignation of their fellow Republican and Speaker John Boehner, but because his odds-on successor, California Congressman Kevin McCarthy, also threw in the towel and withdrew his candidacy as well. Now it’s unclear who might have the inside track to become speaker of the House — the third-highest political office in the land and certainly one of the most powerful. The speaker controls the political agenda of the House, and determines which bills get voted on to become law.

But it’s clear that the Republican majority in the House is ruled by chaos. The party is divided into tea party ideologues and the more moderate members of the establishment opposite them. Every attempt by the moderates to work compromises with the Democrats to accomplish even minimal business is torpedoed by the conservatives. They see any compromise as betrayal. It has been thus for years already, and it proved to be the last straw that caused a frustrated Boehner to resign his office. Any hope of working effectively with the opposition faced with what some observers called a civil war was just no longer possible.

That realization is also likely to be the reason McCarthy withdrew his candidacy for Boehner’s position. He is the House majority leader, and has been through all the struggles and also suffered the humiliations inflicted on Boehner by the right-wing. In addition, 40 conservative members of the House made it known they would not support McCarthy in any case, so it was clear he would not have enough votes to be elected. Republicans hold 247 of the 435 House seats; in order to become speaker, a candidate needs 218 votes.

According to the Internet magazine Politico, there is currently only one Republican capable of getting the 218 needed votes: Congressman Paul Ryan. Politically, he stands between the arch-conservative tea party wing and his party’s moderate faction. He was the Republican vice presidential candidate in 2012. But Ryan is hesitant, at first announcing he would not run after McCarthy announced his withdrawal. Somewhat later, his answer to questions about a possible run for speaker had changed to “I have no comment.”