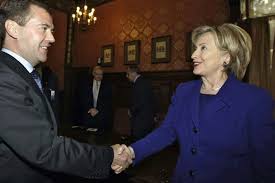 After the first Democratic Party presidential debate, the former first lady has established herself as the front-runner. Commentators have identified Vice President Joe Biden, who is still weighing his chances for a presidential run, as the race’s predominant loser. Joe needs to hurry it up: According to the American media, Hillary is leaping ahead.*

On the eve of the first Democratic Party presidential debate, which took place on Tuesday evening in the fashionable Wynn Resort hotel in Las Vegas, Hillary Clinton was polling at about 40 percent. “Democratic socialist” Vermont Sen. Bernie Sanders won 25 percent. For the other three politicians — former Maryland Gov. Martin O’Malley; Jim Webb, who previously served as a senator from Virginia and as the secretary of the Navy; and Lincoln Chafee, who served as governor and then senator of Rhode Island, all of whom only scored 1 percent — the debates provided a national stage on which they could express themselves. Yet according to many journalists, this last group of three did not take advantage of this opportunity.**

Vice President Joe Biden did not take the opportunity at the beginning of the live broadcast to announce an intention to run for president. The stage at the hotel-casino was set up in order to accommodate an extra podium; however, the experienced politician preferred to watch the show on television. The word in Washington is that Barack Obama would support Biden’s candidacy and would prefer to see him, rather than Hillary, in the White House. However, this political speculation has in no way been confirmed.

In contrast to the turbulent Republican debates — in which the candidates attacked each other in ways that almost “cross the line” of acceptability, and where the unrestrained and eccentric Donald Trump has performed a solo act — the Democratic candidates have been quite polite.

The majority of analysts agree that Clinton gave the strongest performance, defeated her opponents, and reassured her supporters. Additionally, they consider that the televised debate strengthened her position.

The main accusation against Hillary’s position was that she too often changes her stand on topics according to the latest political atmosphere, whether it be support for the trans-America Keystone XL Pipeline, agreeing to free trade regimes, same-sex marriage, immigration reform, etc. Hillary gave the following unruffled response: “Well, actually, I have been very consistent over the course of my entire life. I have always fought for the same values and principles, but like most human beings, including those of us who run for office, I do absorb new information. I do look at what’s happening in the world.” Indeed, Clinton is ready to publicly acknowledge her mistakes, such as her vote in support of the Iraq War during her time as senator, or her use of her personal email for the transfer of materials that have subsequently been identified as “top secret.”

The moderator of the debate brought up the fact that during her time as secretary of state, Clinton pressed a symbolic “reset” button on relations with Moscow.

In response, Clinton drew a stark contrast between the two presidents of the Russian Federation: “Well, first of all, we got a lot of business done with the Russians when Medvedev was the president, and not Putin. We got a nuclear arms deal, we got the Iranian sanction. We got an ability to bring important material and equipment to our soldiers in Afghanistan. There’s no doubt that when Putin came back in and said he was going to be president, that did change the relationship. We have to stand up to his bullying, specifically in Syria, it is important.”

Clinton is the only candidate from the Democratic Party who is in favor of imposing a no-fly zone over Syria. According to the former secretary of state, Putin is creating chaos in the country, “bombing people on behalf of Assad.” The no-fly zone, which the coalition forces would provide jointly, rather than unilaterally by the U.S., will facilitate negotiations with Russia. In fact, all presidential candidates from the Democratic Party rule out the possibility of deploying U.S. ground forces in Syria.

Bernie Sanders, who spoke out in the past against the Vietnam War and against both wars with Iraq, calls the no-fly zone in Syria “a very dangerous situation.” The 74-year-old senator has called the situation in the country a “dual swamp.”*** Sanders believes that Putin will regret his actions in Syria. In response to the mediator’s remarks that the Russian president doesn’t seem like the type of person who is capable of repenting, the presidential candidate said that in his opinion, Putin is “already regretting what he did in Crimea and what he is doing in Ukraine.”

The topic of Russia came up again when the candidates were asked the question: “Edward Snowden — is he a traitor or a hero?” Former Gov. O’Malley expressed the opinion shared by the majority of the candidates, which is that Snowden, the public informant (called a “whistleblower” in the U.S.) who opened America’s eyes to the government’s abuses, should not have fled to Russia.

The Democrats were unexpectedly tough on the former National Security Agency agent, who recently announced that he was ready to return to the U.S., even if it meant going to jail.

Free education in public colleges and universities, health care paid for out of the national budget, paid family leave, raising the minimum wage to almost double ($15 per hour), building a social welfare state in the U.S. according to the model set by Scandinavian countries, the introduction of progressive tax brackets, the struggle against racial and gender-based inequality, the transition to ecologically clean energy — Bernie Sanders’ plan of action has received an unexpectedly wide response from the general voting public. Sanders, who was not considered a serious candidate by anyone at the beginning of the electoral race, has collected millions in donations (the average donation is no more than $20 to $30), and has become a serious competitor for Clinton. In any case, during the first stage of the campaign, candidates count on the support of activists who come to vote in the primaries and party meetings — caucuses.

During the Cold War, the term “socialist” was a swear word in American politics, and was used by conservatives as an insult against leftist politicians. For example, in President Obama’s first term, when the U.S. had only just begun its recovery after the recession, Republican opponents were quick to label some of the steps taken by the White House as “socialism.”

However, the taboo surrounding this word is gradually passing. According to the social research institute Gallup, Inc., 69 percent of Americans aged 18-29 stated that they would be likely to vote for a socialist candidate.

Calling on Americans to rise up and defend their rights, Sanders is not scared of yet another subversive word: “revolution.” The senator aims to protect the rights of the majority and limit the power of the so-called “golden 1 percent of Americans.” His opponents recall the fact that Sanders supported the Sandinistas in Nicaragua, spent his honeymoon in the USSR in 1988, and recently announced that he doesn’t consider himself to be a “capitalist.” It’s interesting to note that the other Democratic candidates, who don’t support the slogan of “political revolution,” nevertheless share many of Sander’s ideas — even Clinton.

Clinton’s five-point economic plan promises electoral reform, a plan for the development of the middle class, and the building of a more socially-oriented state.

Only once in post-war history has the same political party managed to have a candidate elected as president three times in a row. This was during the era of Ronald Reagan and George H.W. Bush. The Democrats want to replicate this achievement in 2016.

* Editor’s Note: On Oct. 21, 2015, Vice President Joe Biden announced he would not run for president.

** Editor’s Note: Webb and Chafee have since dropped out of the presidential nomination race.

*** Editor’s Note: This quotation, accurately translated, could not be verified.