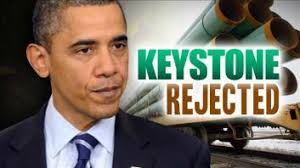 When the oil pipeline project between Canada and the U.S. was submitted to the White House for the first time, American oil production was at its lowest ebb. The oil price per barrel was averaging $140. This was in September 2008, and no one could have expected that shale gas and oil could revolutionize the country’s energy supply. Canada’s proposal to channel its oil to the Gulf of Mexico therefore carried great appeal. Texas refineries saw in it a completely predictable source of supply, and one that was less expensive than supplies from the Middle East (including transportation costs). Thanks to its northern neighbor (Canada), the U.S. hoped to offset the fall in production of its southern one (Mexico).

Since then, the context has changed radically. American oil production has doubled since 2008. Mexico has announced an intention to amend its constitution to allow foreign companies to drill for oil on its territory, which has led to predictions of a resurgence in production over the next 10 years. “Keystone XL is not nearly as important as it seemed to be a few years ago,” summarized Rusty Braziel, president of consulting firm RBN Energy.

The project being put on hold is more problematic for Canada — the U.S.’s main economic partner and oil provider. In fact, the province of Alberta is the world’s leading producer of oil originating from oil sands. Demand for its production will triple between now and 2020, which will bring with it new prospects. But Canada is no longer giving it national importance: the new prime minister, Justin Trudeau, who took office on Wednesday, is not as attached to the project as his predecessor, Stephen Harper. The left-wing prime minister is perhaps even relieved to no longer have to maintain it: He won the election by passionately standing up for ecology. “I … had the opportunity to speak with Prime Minister Trudeau … while he expressed his disappointment … we both agreed that … a whole range of issues, including energy and climate change, should provide the basis for even closer coordination between our countries,” revealed Barack Obama. Moreover, with today’s oil price not exceeding $50 per barrel, Canadian oil is less promising than it was a few years ago. Oil companies have significantly reduced investment in Canada due to a lack of profitable projects.