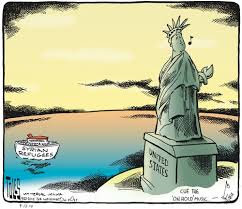 The terror in Paris has unleashed an irrational debate about how to deal with Syrian refugees in the United States. A year before the presidential election, the political atmosphere in America has become unpredictable.

The Republicans were once a reasonable party. They were reliable on both sides of the Atlantic, making policy based on solid, conservative values. Presidents like Ronald Reagan or George H.W. Bush had a keen interest in what was going on outside of the United States and how their country could arrange things internationally.

The party’s golden age now seems light years away. Since the attacks in Paris, the Republicans have entered into a competition for the person with the most brutal proposal to keep out the Syrian refugees.

As If Half the Middle East Were Standing on Their Doorstep

First a few examples: Ben Carson compares Syrian refugees with “rabid dogs.” Donald Trump proposes to close mosques for safety reasons. Ted Cruz, whose parents once fled Cuba, wants to conduct religion tests at the border to sift out all the Muslims. Governors bar Muslims from states, mayors from cities. The party talks as if half the Middle East were at New York’s John F. Kennedy International Airport immigration counter.

Apart from the fact that none of the assassins so far identified in Paris were Syrian, the debate is absurd in many respects. A look at the facts: Since the beginning of the Syrian civil war four years ago, America has taken in 2,184 Syrian refugees according to the latest figures, which is about as much as Potsdam-Mittelmark braces itself for this year alone. President Obama has announced that next year the U.S. will allow around 10,000 more Syrians into the country, which is an increase, but measured against the leadership that America emphasizes so much, is still ridiculously few.

A large majority of Republican and Democratic representatives now want new, stricter rules. In the future, the FBI director should guarantee the harmlessness of Syrian refugees by personally signing off each one. This is something he is unlikely to do, which means the new rules would act as a de facto stop sign for anyone fleeing from the utterly destroyed country. The Senate and Obama can still stop the law, but the message is clear: We are too lax.

This is no less absurd. Even now the United States understandably pulls out all the stops in reviewing asylum applications from Syrians in order to rule out those with a terrorist background. The process is so intensive that on average it takes more than 18 months to complete an individual case. It’s hardly a question of negligence. Just recently, a case came to light where one family had to wait three years for asylum. It would have been faster if they had swum across the Atlantic.

Some might now say that a little debate at election time should probably be permitted. Nevertheless, President Obama is steadfast. America will accept another 200,000 refugees other than the Syrians in the next two years. And this is, fortunately, only the Republicans.

All right. But the Republicans have a lot of people behind them, at least in regard to the refugee issue. Some 50 percent of Americans reject Obama’s plans. This number points beyond the immigration debate. If a substantial portion of the country disconnects on such a sensitive issue of fact and is guided solely by diffuse feelings, this is a sign of growing uncertainty about their own role in the world. History has shown that an insecure America domestically and internationally may make strange decisions.

It is only a year until the presidential elections. Only one thing is certain: These 12 months will be totally unpredictable for the United States – and for everyone else involved.