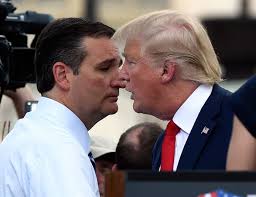 Once again, everyone is talking about Donald Trump. Monday evening, he argued for closing the U.S. off to all Muslims; no more allowed until America figures out why Muslims have such hate for the land of the free.

It would be a historic move for the U.S., turning away from all for which the country stands. From the left-leaning Democratic presidential candidate Bernie Sanders, to the extreme right of Republican candidate Ted Cruz, both have Trump in their sights. Is this finally the week that marks Trump having gone too far?

It didn’t seem extreme on Monday when Trump, speaking aboard a decommissioned battleship on Pearl Harbor Day, laid his Islamophobic cards out on the table. The fans in attendance found it to be great and “wise,” they told reporters who were present. What Trump wants cannot happen, either morally or legally and strategically, across the Islamic world; it is a very bad idea. But Trump supporters don’t want to hear that.

These supporters are not average Americans. They are Republicans, more specifically a politically active subgroup of them and of this subgroup, they currently make up about one-third. Political data journalist Nate Silver noticed that this is a piece, or 6 percent, of the population, about the same number of people who believe that the moon landing was staged by NASA.

Get Rid of Trump Quickly

Nevertheless, Trump remains on top in the polls nationwide for the Republican presidential nomination, thanks to statements regarding other politicians, journalists and Muslims with which no one initially thought he would get away.

Time after time, experts said that he made it impossible for himself. Time after time this correspondent has thought the same. During the Dutch Sinterklaas Festival, I was called out for it by those around me: “Didn’t you say a few months ago that we would quickly be rid of him?”

An awkward silence on my behalf. Trump had just seen his following grow to an astonishing 36 percent nationwide and the impact of the San Bernardino attack was not even included in this poll.

It is probable that this attack has forced even more people to reluctantly but desperately stand behind Trump, which he said himself on Saturday. “Every time things get worse, I do better,” he said at a rally in front of 2,500 people in Iowa. “Because the people have confidence in me.”

However in truth, the polls say something different in Iowa. There, more people have confidence in Cruz. In a poll that was made public on Monday, Cruz had the support of 24 percent of the Republican voters, 19 percent were against Trump. This is only one state, but an important one nonetheless. The first vote takes place in Iowa on Feb. 1, and the winner has the glory for weeks of being the one who could potentially make it. That leads to more attention in the media, more support, and more money.

It is also interesting that specifically in Iowa, many voters make up the group on which Cruz has based his national strategy: evangelical Christians. The radical right-wing senator from Texas has support from the tea party conservatives. He believes and promises that he can become president if he can combine this group, which puts more pressure on taxes than abortion, with conservative Christian Americans to whom the opposite applies.

Therefore, he is talking much more now about the moral dangers that threaten America, aside from taxes and freedom. If Cruz is successful in forming the coalition, it is only a matter of waiting until Trump falls out of favor nationally.

Until recently, the conservative Christians would prefer to see someone else win — former neurosurgeon Ben Carson — and nationally, they appear to be on the way to catching up to Trump. However with Carson, things aren’t going so well in Iowa and nationally, after having made a certain declaration of war on behalf of Europe and the U.S. after the Paris attacks. What at first was Carson’s appealing trait — his calm appearance and preference for analyzing rather than making inflammatory statements — has left him suddenly uncertain and seemingly weak.

Perhaps the uncertainty was there, especially on the international front where suddenly each candidate must voice an opinion. Here Carson was not well read. His advisers did everything possible to brush him up, but there has yet to be any great improvement.

Last Thursday, just as a number of other candidates have done, Carson gave a speech in front of a Jewish group within the Republican Party. He read from notes, which is not very common for a campaigning politician. To make matters worse, it turned out that he did not know how to pronounce “Hamas,” the name of the Palestinian Islamic group that has had power in Gaza since 2007 and is in constant conflict with Israel. From his mouth, it sounded like “hummus,” about which Americans and Israelis have more positive thoughts.

Competitors and media commentators have been joking about it, but it is something to call out: You want to be president but clearly haven’t seen a news broadcast in the past eight years. This will not happen to Cruz who, just like Trump, can precisely point out who America’s enemies are and promises to make them pay. However, he is looking for them mostly abroad. If he becomes president, he recently promised that the Department of Defense will eliminate the Islamic State group in Syria and Iraq. End of discussion.

In Iowa, the combination of decisiveness and faith bodes well. Yesterday, Cruz was at the top of the state polls. Perhaps it is no coincidence that yesterday, the candidate who fears him the most, the candidate who hates to lose above all, once again has overstepped himself. At least everyone is talking about Donald again.