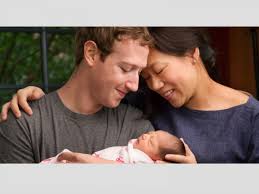 The news broke with a bang on Facebook and almost eclipsed the works of the climate summit in Paris, where world leaders are trying to find solutions for the future of the planet in the coming decades. On Tuesday, the couple Mark Zuckerberg and Priscilla Chan, she, a pediatrician, and he, now giving presentations, announced two births at a time – one of their first daughter, Maxima, and the other of the Chan Zuckerberg Initiative, an organization that, at first sight, is just another charitable institution.

The letter — which Mark and Priscilla wrote as if it were to their daughter — was destined for the billions of Facebook users and others to whom the news arrived by different means. It starts as a dedication of love, including an affirmation (that is then contradicted by the 2,213 words that follow it): “Your mother and I don’t yet have the words to describe the hope you give us for the future.”

The letter shows that the couple may lack many things, but money and words are not part of that list. In the announcement — viewed by many as the beginning of a new era in philanthropy — Zuckerberg and Chan pledged to put a fortune equivalent to 99 percent of their shares of Facebook into the coffers of a limited liability company, with the general objective of “promoting human potential” and “equality.” At the current price, these shares are worth about $45 billion (or more than 42 billion euros, for those whom the conversion, in this case, is important).

The announcement was received by Internet users in the same way all important announcements have been received since Facebook elevated its commentary boxes to the category of an informal tribunal: for each comment of praise, a venomous attack; for each ode to the philanthropy of a dedicated millionaire deciding to change the world, an accusation that their (hidden) strategy is to escape taxes.

But there is much more to Zuckerberg and Chan’s announcement than just the eternal discussion about philanthropy and the creation of legal schemes to avoid the payment of taxes.

Firstly, the technical questions, which can be annoying but are important to understanding what is at stake. Contrary to what was announced all over the world on Tuesday, The Chan Zuckerberg Initiative will not distribute money to institutions of charity, nor is it a foundation or a nonprofit organization; it was created as a business of limited responsibility, and this says much about the previous bad experiences of Zuckerberg in the world of philanthropy, and about the emergence of a new class of multimillionaires born into the universe of technology businesses.

By creating a limited liability company, Mark and Priscilla have much more latitude in managing the money earned from their shares of Facebook and now destined for philanthropy. They can invest in private businesses and influence policy decisions through lobbying groups, for example, which are out of reach of nonprofit organizations.

After the couple’s more sentimental letter, came the pragmatic clarification of the company: “The Chan Zuckerberg Initiative is structured as an LLC rather than a traditional foundation. This enables us to pursue our mission by funding non-profit organizations, making private investments and participating in policy debates — in each case with the goal of generating a positive impact in areas of great need. Any net profits from investments will also be used to advance this mission,” it informs.

The decision to flee from more traditional funding — or from the giving of money to other charity organizations — could be related to Zuckerberg’s disappointing first philanthropic experience in 2010. In Tuesday’s public letter, Mark and Priscilla gave us reasons that imply this in two points on their list of intentions.

“We must engage directly with the people we serve. We can’t empower people if we don’t understand the needs and desires of their communities. We must build technology to make change. Many institutions invest money in these challenges, but most progress comes from productivity gains through innovation.

“We must participate in policy and advocacy to shape debates. Many institutions are unwilling to do this, but progress must be supported by movements to be sustainable. We must back the strongest and most independent leaders in each field. Partnering with experts is more effective for the mission than trying to lead efforts ourselves.”

These two passages indicate that Mark Zuckerberg spent the last five years trying to perceive what the best way is to support the investigation and development of social projects — in education and in health, for example — without losing total control of his money.

Five years ago, the founder of Facebook gave $100 million to create a fund with the objective of improving the public schools of Newark, N.J., a city with high crime and poverty rates. The idea came from two [other] unlikely authors with differences between their party affiliates and political ambitions: Cory Booker, at that time, mayor of the city and currently a Democratic senator; and Chris Christie, the state governor and now a Republican Party candidate for the White House.

“Something else that didn’t work out as planned,” said [a host of] NPR public radio to the author Dale Russakoff, a long-time reporter for The Washington Post and author of the book, “The Prize: Who’s in Charge of America’s Schools?” The New York Times praised it as “one of the most important books on education to come along in years.”

“Mark Zuckerberg was hoping to use his hundred million dollars to, in part, negotiate different contracts with teachers to have more flexibility in who got hired and who got fired and who got placed in what school. And then he found out something he didn’t know initially, which was the seniority thing was controlled by New Jersey law,” recounted the journalist, referring to a clause which protects teachers with more years of service in case of collective redundancies. Furthermore, the project did not directly involve teachers, parents or students, and was quickly taken over by a multitude of consultants, many of whom received thousands of dollars a day to say what those same teachers, parents and students needed to do to improve the public school system.

Criticism and Praise of the ‘Philanthropic Hacker’

The launching of the Zuckerberg Chan Initiative is a response to this lack of control, but no one knows if it will make any difference in the way it treats philanthropy, and much less if it will be better or worse for society in the long term, principally when the charitable initiatives and the “promotion of human potential” come from multimillionaires who made a fortune in the “inherently biased economic system,” as Devon Maloney wrote in the newspaper The Guardian.

“Simply by creating and overseeing the world’s largest social network and one of the most influential corporations on Earth – by gathering and selling untold amounts of data under the protection of inscrutable legal jargon, by implementing shaky harassment and reporting policies that permit certain kinds of abuse, by employing 68 percent men and fewer than 50 black people in a company of more than 10,000 employees (to say nothing of the unholy spectre of gentrification), Mark Zuckerberg himself continues to reproduce the inequality he and his wife are taking aim at with their pledge,“ criticized the journalist, who [questioned Zuckerberg’s philanthropic efforts] by recalling the reaction of the writer Teju Cole in 2012 while campaigning against the Ugandan guerrilla leader Joseph Kony.

“From [Goldman] Sachs to Kristof to Invisible Children to TED, the fastest growth industry in the U.S. is the White Savior Industrial Complex,” wrote Cole. “The white savior supports brutal policies in the morning, founds charities in the afternoon, and receives awards in the evening.”

Cole was referring to the more traditional initiatives of solidarity and philanthropy, inherited from Andrew Carnegie and John D. Rockefeller, passed down from the 19th century to the 20th century. But the figure who revolutionized the music industry 100 years later with his file-sharing site, Napster, Sean Parker (later co-founder of Facebook) believes that the new technologies have already moved the bases of philanthropy; he calls it “philanthropy for hackers,” of which Bill Gates and Zuckerberg are two of the best examples.

“Hackers are popularly considered to be troublemakers, but they are also dedicated problem solvers, as interested in discovering holes in systems as they are in exploiting them for personal gain. By identifying weaknesses in long-established systems, they have successfully disrupted countless industries, from retail and music to transportation and publishing,” wrote Parker in an article published in June by The Wall Street Journal.

Recognizing that young multimillionaires – the majority of which are currently around 30 years old — “… are underprepared for the enormous responsibility that has been handed to them,” Parker said. “At the same time, they are intensely idealistic, so as they begin to confront the world’s most pressing humanitarian problems, they are still young, naive and perhaps arrogant enough to believe that they can solve them.”

Summing up the philosophy of this new generation of philanthropists — who distinguish themselves by starting to dispose of their income during their lifetimes, not waiting to give money to charities at the time of the reading of their wills — Parker counsels those who wish to follow in the steps of Zuckerberg: “Start giving early. There’s no better time to start than the present.”

*Editor’s Note: The translator believes that in Portuguese, the primary meaning of the term “hacker” is not quite the same as its more broadly understood meaning in English. In this title, it is intended to be understood as a slang term in its benign and complimentary sense. It can be used to mean someone who is very skillful, dedicated to understanding and modifying aspects of the inner workings of computers and programming and systems. The author is not using “hacker” in its more common meaning in English to describe an individual who subverts computer security possibly for nefarious ends.