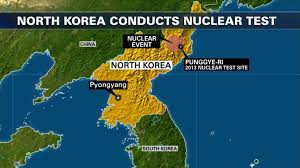 With no prior warning, North Korea has conducted its fourth nuclear weapons test. While the detonation was purportedly from a hydrogen bomb according to Pyongyang, the United States and South Korea have both suggested that the explosion was only atomic in nature. Even so, North Korea’s brazen nuclear weapons test in defiance of a United Nations ban is a clear violation of U.N. resolutions and must be met with severe censure and punishment. As the world scrutinizes this most recent test, many eyes have been fixated upon the debate as to whether or not the detonation truly originated from a hydrogen bomb, a misplaced focus that misses the forest for the trees. The simple fact is that whether hydrogen or atomic, if North Korea cannot proceed with its nuclear weapons tests in a responsible manner, trials of any weapons of mass destruction must be viewed as actions that challenge the very limits of U.S. and Chinese tolerance.

A Nuclear Capability without Responsibility Sparks Fears among Other Nations

It is not terribly difficult to produce nuclear weapons, and several nations possess the technology to do so. While China remains the sole nation with an official nuclear arsenal among its immediate neighbors, the production of such weapons can only be a matter of time given the scientific and technological capabilities of Japan and South Korea. Japan in particular has long maintained that it would be able to quickly acquire nuclear weapons capability in the event that its constitution of peace is overturned. Consequently, despite the existence of the Treaty on the Non-Proliferation of Nuclear Weapons, nuclear weapons technology and materials have flowed steadily into the hands of several states, including North Korea. Therefore, the true question lies not in which states are capable of producing nuclear weapons, but which ones are capable of wielding such power responsibly, with restraint instead of recklessness.

After China successfully detonated an independently developed and produced atomic bomb in 1964, Zhou Enlai in his capacity as premier of the State Council issued a public proclamation indicating that “China will not be the first to use nuclear weapons at any time or under any circumstances.” While China was not a member of the United Nations at the time but a “Communist bamboo curtain state,” in Western parlance, Zhou Enlai’s statement resounded widely. Despite a wide ideological gap between China and many other nations, Beijing’s responsible stance made a lasting impression. As for North Korea, its actions in recent years have clearly left most nations, including China, unconvinced of its sense of responsibility. Accordingly, the strong reactions to North Korea’s repeated nuclear weapons tests are a result of concerns over whether North Korea can stand upon the world stage as a responsible nuclear state once so armed — a prospect that many find dubious at best.

Looking broadly at the Cold War era, the United States and the Soviet Union possessed nuclear weapon stockpiles sufficient to destroy the world many times over, including hydrogen bombs on the order of tens of millions of tons. Yet Washington and Moscow still set up a military hotline to forestall the widespread destruction that might result from misunderstandings, exhibiting some degree of responsibility toward our world. Accordingly, as a staunch ally of North Korea during the Korean War, keeping China in the dark about the most recent nuclear weapons test naturally seems in poor taste, and its strong response is entirely understandable.

Moreover, prior notification aside, if the weapon tested was indeed a hydrogen bomb as Pyongyang asserts, China’s northeastern districts would have been placed in exceedingly close proximity to the blast, with the testing site a linear distance of approximately 100 kilometers (approximately 62 miles) from the Chinese border. As the yield of a hydrogen bomb obviously far surpasses that of its atomic brethren, any mishap during the test in the absence of any forewarning would have seen China’s densely populated northeastern reaches bear the brunt of the fallout, with the potential consequences of the area becoming enshrouded in radiation terrible beyond imagining. And in a broader sense, if relations between North Korea and China should turn sour, many of China’s major northeastern population centers would be within the operational range of the North Korean air force. It is because of this that the Chinese Foreign Ministry’s response has been swift and resolute, as changing circumstances have made it necessary to make its position expressly clear.

The political blowback from the North Korean nuclear weapons test will be intense, and will very likely ignite an arms race in Northeast Asia. First, South Korea will undoubtedly ramp up its military spending, the United States will shift more troops and equipment to the Korean peninsula and China will bolster its troop strength throughout the Shenyang Military Region along the North Korean border. Most notably, Japan, which has vastly expanded its military in recent years, will also cite the “North Korean nuclear threat” in further adding to its forces, and while Prime Minister Shinzo Abe’s administration will not go as far as to push for a Japanese atomic capability to match that of North Korea, it will still have justification enough for beefing up military expenditures. The test has inflated the crisis coefficient within Northeast Asia enough to make the region a volatile powder keg, a fact that does not bode well for any of the nations concerned.

The United States and the West have long said that China as an ally of North Korea has unmatched influence over it, but this most recent nuclear test has disproved such an outlook. China is in fact no different than other nations in having not received prior notice about the test from Pyongyang, and pushing responsibility for dealing with North Korea onto China’s shoulders is neither a fair nor effective strategy. As many are aware, there is much that North Korea wishes of the United States, but as the United States is accountable to South Korea and Japan and thus cannot deal with North Korea directly, it wrongly leaves the task to others.

Turning specifically to the six-party talks aimed at discussing the North Korean nuclear weapons crisis, it would seem from this most recent episode that negotiations are not likely to resume in the short term. Even so, all states must find some method or channel through which they can initiate dialogue with North Korea, or else the reclusive state, having been thus isolated, will shed no tears as it burns the last few bridges remaining to it.