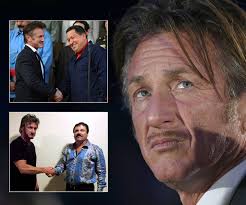 The only explanation for Sean Penn’s interview with “El Chapo” Guzmán is the frivolousness that contaminates political life, which is leading to the replacement of ideas by entertainment.

Journalism is one of the most dangerous professions in the world today. Every year, reports by specialized organizations list dozens of reporters, interviewers, photographers and columnists who are kidnapped, tortured or murdered by religious and political fanatics, dictators, criminal gangs and drug traffickers, or by the masters of economic empires who see the existence of a free and independent press as a threat to their interests.

This no doubt explains the indignation caused by actor Sean Penn’s interview with the Mexican murderer and drug trafficker “El Chapo” Guzmán — whose fast-increasing fortune puts him among the richest men in the world, according to Forbes magazine — shortly before he was captured by Mexican authorities. The interview, which appeared in Rolling Stone magazine, is very bad, an exhibition of unbridled and clownish egomania and, to make things worse, overflowing with sympathy and understanding toward the ruthless multimillionaire criminal who is credited with 3,000 deaths, as well as countless other outrages, among them a large number of rapes.

Sean Penn is a very good actor, and has a reputation as a “progressive,” a term that, when speaking of Hollywood people, often signifies an irresistible soft spot for dictators and petty Third World despots. This was shown in a magnificent article* by Maite Rico, who records the tributes by Penn (and by Michael Moore and Oliver Stone) to Fidel Castro and Hugo Chávez: “He’s one of the most important forces we’ve had on this planet,” ”a fascinating guy,” “I do it in love, and I do it in gratitude,” etc. How does the actor explain, then, the fact that in the latest elections, 70 percent of Venezuelans categorically rejected the Chávez regime? He probably hasn’t even heard about this.

The case of Penn can only be explained by the extraordinary frivolousness that, in our time, contaminates political life, where images have replaced ideas, and advertising determines values and lack thereof, motivating large segments of the population. To praise Fidel Castro as “one of the Earth’s wisest people,” according to Stone, is a pathetic exhibition of cynicism and ignorance, equivalent to feeling admiration for Stalin, Hitler, Mao, Kim Il-Sung or Robert Mugabe, or defending as exemplary a dictatorship of more than half a century that has converted Cuba into a prison from which Cubans try to escape in any way possible, including braving the sharks. Thinking of Commandant Chávez as a political rock star is such a pathetic exhibition, no less, after his regime transformed Venezuela into a poor, violent and repressed country, with a standard of living that falls further day by day due to galloping inflation — the highest in the world — and where corruption and drug trafficking have taken hold in the very heart of the government.

How comfortable it is for these prominent figures who come from Hollywood, who come from a safe and secure legal system! No one will show up to strip them of their homes, their businesses, their investments; no one will demand that they answer for what they say and write. They are free to have a good time, to play at being “progressives.” They can accept invitations from clumsy despots who treat them like kings and flatter them, pander to them and regale them. They can defend oppressive and brutal regimes that make millions of citizens live in fear, poverty and deception imposed by those who have stripped them of the truth and of their most fundamental rights. Now, in addition to dictators, the “progressives” of Hollywood are also defending common criminals and serial killers, like “El Chapo” Guzmán, a poor fellow who, according to Penn, turned to crime because it was the only way of surviving in a world that has atrophied because of injustice and oligarchs.

Journalism, regrettably, is also one of the victims of the entertainment society of our times, where appearance is reality and politics, even life itself, has now become merely symbolic. Using the profession of journalism to promote and disseminate frivolous ideas, foolish trivia, and flagrant political lies is also a way to insult the profession and some of its practicing professionals who perform real miracles in doing their job of reporting the truth for a modest income and while running huge risks. People like Penn, Stone, and others like them don’t even realize that their attitude shows a prejudicial contempt for Venezuela, Cuba, Mexico, and developing nations in general, and that their attitude is hypocritical when they praise and promote systems and dictators for these countries that they would never put up with in their own country. In this, they are a lot like Günter Grass who, in the 1980s, called for Latin Americans to follow the “example of Cuba,” while in Germany, he was defending social democracy and combating the Communist model.

Of course, my critique of irresponsible daredevils like Penn doesn’t mean that I believe actors shouldn’t be involved in politics. Quite the opposite; I am firmly convinced that participation in the public debate, in civic life, is a moral obligation from which no one should feel excused, especially if one is not happy with the society and world in which one lives. And I believe that this obligation is greater when a citizen — as is the case with the filmmakers in question — is more well-known and consequently has a better chance of reaching a wide audience. But, by the same token, it is critical that this participation be based on a solid understanding of the issues about which an opinion is being expressed.

In this respect, I would like to cite the response that writer Don Winslow, another North American, but a well-informed and honest one, gave to Penn’s article. You can read his response on the Deadline.com website. Winslow, who has been investigating the Mexican drug cartels for 20 years, and who has written a prize-winning book, “The Cartel,” on the subject, reminds us of all the journalists who have been mutilated and murdered for investigating “El Chapo” Guzmán. And it is surprising that Penn did not ask the capo why, after his first escape from jail in 2001, he unleashed that “war of conquest” against the other cartels that resulted in more than 100,000 murders. Other questions that Penn didn’t ask include how many millions of dollars “El Chapo” has spent buying judges, politicians and police, the reason he decided to sign a cooperation agreement with the sadistic and murderous Zetas organization, and why he let his lackeys bring pubescent girls to him in his cell when he was in prison. Among other things, Winslow also deplores the fact that during seven hours of conversation with him, Penn didn’t put a single question to “El Chapo” Guzmán about the 35 people (among them 12 women) that he murdered, accusing them of working for the Zetas, before making peace with this horrific gang.

We are well aware of the reasons that Penn didn’t ask “El Chapo” Guzmán anything awkward: He went into the interview with the murderer’s answers already framed in his mind, based on his own cynicism and lack of seriousness. He presents him as a victim (a hero, in a certain sense) of an economic and political system that the figures he admires, Fidel Castro and Chávez, have started to work to eliminate. And he backs it up with his well-earned reputation as a “progressive,” besides being a famous actor and millionaire.

*Editor’s note: The article cited was “Fascinación Eterna por el Déspota,” or “The Eternal Fascination with the Despot,” and appeared in El Pais on Jan. 17, 2016.