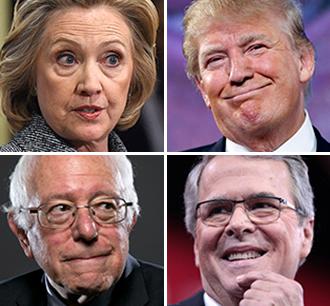 Within Republican ranks, rants which completely ignore facts have become a political program in their own right. They do not serve the U.S. at a time when democracies are faced with increased populism and are the target of Islamic State jihadis.

There were many on the other side of the Atlantic who thought that the U.S. democracy, with its population all of 330 million, would show its limitations by voting for a representative of one of the two dynasties that have dominated the U.S. political stage for decades: Jeb Bush or Hillary Clinton. On the one side, the brother of one of the worst presidents that the U.S. has ever known. On the other, a former first lady, former senator and former U.S. secretary of state. However, the 2016 electoral campaign has proven to be full of surprises. It saw the arrival of a former reality TV show host, billionaire Donald Trump, and of a “democratic socialist,” Bernie Sanders, who wishes to stir up a revolution. After having elected the first African-American president, U.S. citizens are showing that they are unafraid of opening up possibilities.

However, this apparent vitality conceals a deep disquiet. Upon following electoral meetings in Iowa, there is a striking realization. Elites are detested and institutions slammed. Despite the fact that the U.S. only has two dominant parties, neither is spared by the insurrectional mood against Washington D.C., the all-powerful Wall Street, and the power of the lobbies. This, despite the fact that the Democratic administration saved the automobile industry and spearheaded the most ambitious health care reform since World War II. But a large part of the U.S. electorate only feels contempt for Barack Obama, who embodies all that they reject: a U.S. that tries to open itself to the world and who is trying to deal as best it can with globalization. Economic growth did not benefit everyone in a country where social inequalities have exploded.

The Republican Party – on the verge of implosion – is panicked by the unstoppable, unknown Donald Trump. On the Democratic side, even the hugely experienced Hillary Clinton, hindered by an email issue which could prove to be a problem during the electoral campaign, is finding it tricky to contain Bernie Sanders, found to be consistent and trustworthy. If the latter is castigating U.S. oligarchy, the Republicans’ rants against the establishment are broader. They have become a political program which, in itself, is not rooted in fact. But they do a disservice to the U.S. at a time when democracies are facing an increase in populism and are the target of Islamic State jihadis.

By painting an apocalyptic picture of the U.S., by singling out immigrants, the likes of Donald Trump, Ted Cruz and a majority of Republican leaders are positioning themselves to the extreme right of the political playing field. Such a policy of scorched earth is not without danger. It is capable of exacerbating the centrifugal forces in American society. For the worse.