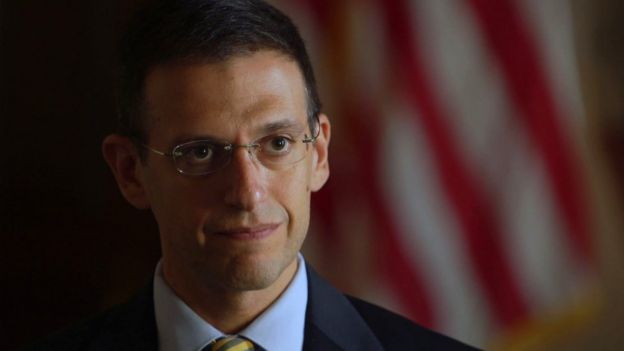 Moscow considers the accusation to be a fabrication and slander.

The Department of Treasury’s opinion about the corruptness of Russian President Vladimir Putin corresponds to the position of the Obama administration. This was stated by White House Press Secretary Josh Earnest. On Jan. 25, a Treasury Department official accused Putin in a BBC news investigation of having “hidden treasures.” Russian officials in the State Duma and the Federation Council saw an attempt in this statement by the White House representative to “split Russia into parts during the election year” and at the same time put pressure on Russia’s authorities and justify Obama’s policy failures “in the sunset of his political career.”

Earnest was asked about bringing possible new sanctions or criminal charges against Russia due to the accusations we heard on the BBC. He said he did not have information about this. And at the same time he reminded us that Washington never informs us in advance about its plans to place restrictive measures.

The scandal erupted after the Jan. 25 BBC news story about the president of Russia, in which Treasury representative Adam Szubin said that Putin is corrupt and the U.S. government had known about it for “many years.”* “We’ve seen him enriching his friends, his close allies, and marginalizing those who he doesn’t view as friends using state assets. Whether that’s Russia’s energy wealth, whether it’s other state contracts, he directs those to whom he believes will serve him and excludes those who don’t. To me, that is a picture of corruption.”

In response to that, the press spokesman for the Russian president, Dmitry Peskov, called Szubin’s words an “official prosecution,” which is “first of all, a clear indication of who is in charge, and secondly, these words need to be proven. If they express such an official statement without proof, then it casts a shadow on the reputation of the agency,” said Peskov. The head of the Russian presidential administration, Sergei Ivanov, called the statement by the Treasury “nonsense.”

Moscow has already commented on the position of the White House. “The statements of the official representative of the White House, that the prosecution of the U.S. Treasury officer in Vladimir Putin’s address reflects the U.S. administration’s position, is nothing but an attempt by the Obama administration to erase the memory of its fellow citizens about everything that was promised during his election campaign, but has not been implemented,” stated Secretary of the General Council of United Russia and State Duma Deputy Speaker Sergei Neverov. He recalled that at the beginning of Obama’s first presidential term, “there were so many promises,” but according to Neverov, they have not been fulfilled. Therefore, according to Neverov, in order “to somehow justify his tenure as president in the twilight of his political career, he, Barack Obama, has decided to seize the last opportunity to try and make his leave bright.” Neverov said that Obama does it “by exploiting a man who raised Russia from its knees, thanks to whom pensions and benefits started to be paid off in time, thanks to whom Russian society was consolidated, Crimea reunited with Russia and the country’s national interests are put at the forefront.”

Konstantin Kosachev, the head of the federation council’s international affairs committee, has expressed his point of view too. “I think that it is a coherent and offensive position of the current U.S. president’s administration, an attempt to divide the country into parts during the election year, to put pressure on Russia, to limit the possibilities of Russia in its actions in the international arena so they could preserve the world’s sole leadership with the help of all available and unavailable methods.”

On Friday morning, the Kremlin responded to the White House’s accusation of Putin. “We consider statements of my colleague in the White House unacceptable both from the point of view of general practice of international relations and of bilateral Russian-U.S. relations. We consider these statements outrageous and insulting,” said Peskov.

*Editor’s note: Adam Szubin serves as the Acting Under Secretary for Terrorism and Financial Intelligence in the U.S. Department of the Treasury.