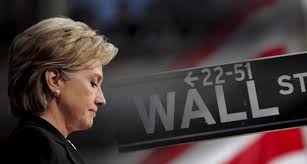 Hillary Clinton had her real chance in 2008. She was younger so she came across as a relatively new, fresh figure. And she was dragging less baggage behind her.

Her record had not yet been affected by the errors she would later commit as the head of American diplomacy. She was less linked to Wall Street.

And the idea of seeing a first lady reach the White House produced much more enthusiasm then than it does today.

In 2016, we are no longer counting the women in positions of power, from Christine Lagarde, managing director of the International Monetary Fund, Angela Merkel, the most powerful woman in Europe who, eight years ago, had only recently become chancellor of Germany.

A woman at the head of the United States would certainly represent another lovely symbolic advance, but today, that would no longer be great and revolutionary, above all at a time when American power is declining on the international scene.

Hillary Clinton, of course, still gets credit for the undeniable qualities that make up her strength — her quick intelligence, her innate dignity, her extensive experience in political and governmental action, the progressive values that she has always professed. But she no longer has the spark that would have propelled her into power in 2008 if she hadn’t faced a more charismatic candidate.

Without her being wholly responsible, her lengthy time in the State Department has coincided with a period in which the United States has acted pursuant to hesitant and ambiguous policies with regard to Ukraine as well as in the Near East.

However, that which is truly her responsibility can be summed up in three words: “Libya,” “Benghazi,” and “emails.”

It was she who in 2011 convinced Obama to lean in favor of a military intervention in Libya, an operation whose catastrophic effects we are still measuring. Clinton was also in favor of invading Iraq in 2003; a huge lack of judgment in both cases.

After the terrorist attack in 2012 on the embassy in Benghazi that cost the lives of an American ambassador and a senior official, Clinton had to admit responsibility. Her department had, in effect, refused the embassy’s requests for security reinforcements.

She has also been heavily criticized for initially blaming the attack on popular reaction to an Islamophobic American video.

Another element that has tarnished her too-lengthy time in the State Department is her systematic use of the Clinton family Internet server rather than the obviously more secure federal administration server. The State Department discovered that among the tens of thousands of messages that hackers could have accessed, there were 1,200 confidential messages and 22 that were classified as “top secret.”

This was an incredible error; it is hard to decide whether to attribute it to thoughtlessness or pure and simple arrogance, as in, “I’m Hillary, I do what I think is right and only trust my own mailbox.”

One of Clinton’s problems is having seen too much, having been on the scene too long, being part of a power couple that seems to believe that it has the right to everything, including the presidency and a rapid and considerable gain in wealth due to Bill Clinton’s political notoriety, and now, that of his wife.

For the average voter, the events in Benghazi and the email affair will be old news as the presidential campaign comes to a close, but there is a matter that will continue to haunt her — precisely the nail that her Democrat adversary, Bernie Sanders, is relentlessly banging on.

That is her links to Wall Street and the high finance giants who made the Clintons multimillionaires and more recently, rewarded Hillary Clinton with honors as sumptuous as they are excessive for her “speeches.” We will come back to that next week.