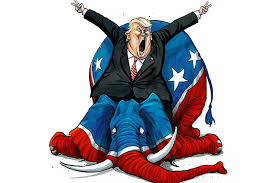 Donald Trump plays the role of an ultra-right-wing hardliner in the primaries. But in the general election, he’ll soon change his tune because Trump is no ideologue. He’s just a power-hungry egomaniac.

Super Tuesday in the United States is tomorrow, March 1, and Republicans and Democrats in 12 states will vote for the candidate they want to be their standard bearer in the November general election. Whoever wants that honor at the summer convention will have to win a majority of delegates by then. The Republican candidate needs a minimum of 1,237 delegates, and the Democratic candidate will need at least 2,383.

On Super Tuesday alone, one-fourth of the total delegates will be decided. That’s why that day is so important — especially for the still-large number of Republican candidates for whom it will be make-or-break day. On Wednesday morning, we will know whether Donald Trump’s victory parade can still be stopped or not.

The Republican establishment is frightened of Trump, but not so much because of his conservative positions; he doesn’t differ significantly from his two main rivals, Sen. Marco Rubio of Florida and Sen. Ted Cruz of Texas; and also not because of his unpredictability and obscene language. Republicans are worried, first and foremost, that Trump is a will-o’-the-wisp as opposed to a bedrock conservative. They can’t accurately measure him; they can’t judge how politically well-versed he is, not to mention the fact that he has absolutely zero political experience.

Riding a Wave of Political Contempt

Trump is riding a wave of political contempt that has nothing but dislike for Washington and the way it does business. But the party leadership has yet to come up with a strategy against this outsider; they seem baffled and panic-stricken.

For the past few weeks, Rubio and Cruz have been using their heavy artillery against Trump. But what’s strange is that although all their political accusations are true, Trump is apparently still seen as the lesser of the evils when compared to Rubio and Cruz.

They say Trump’s flag changes with each shift in the direction of the wind, and that while he talks like a conservative, he doesn’t walk like one; that he hasn’t been a Republican long enough and has historically supported Democratic politicians with election donations.

His opponents accused him of supporting a woman’s right to an abortion before he was obliged to oppose it when he became a Republican; that he supported stronger gun controls before — as a reborn conservative, he was suddenly against all restrictions on firearms; and that he wanted reform of immigration laws and supported a path to citizenship for illegal aliens before he entered the presidential race and adopted a platform that included hermetically sealing America’s southern border and building a wall between the U.S. and Mexico that he wants the Mexicans to pay for.

He is also accused of once calling Democratic presidential candidate Hillary Clinton a “fabulous woman” and a great secretary of state.

It’s true: Trump is opportunistic, inexperienced, unappealing, as well as a right-wing braggart. After hearing what he says and seeing how he acts, one can only be frightened and repulsed. But Trump is no ideologue; he has no genuine convictions. Trump is mainly for Trump. He’s just an egotistical narcissist.

He Will Move Back Toward the Center

But above all, he wants to win, and he will stop at nothing to do so. The streetwise Donald Trump is opportunistic beyond imagination. Because he knows he can only be successful with Republican voters by positioning himself on the extreme right, that’s exactly what he’s doing.

But that’s no long-term strategy. If Trump is successful in getting enough delegates — and this is as sure as an “amen” at the end of a prayer — he will shift back to the political center because he knows that’s the only chance he has of winning the White House. That’s confirmed by the fact that Chris Christie, governor of New Jersey and a moderate Republican, has endorsed him.

In contrast to foreign policy hawk Marco Rubio and the dyed-in-the-wool ideologue Ted Cruz, Trump doesn’t champion any far-right-wing political program. His credo seems to be “Here I stand, but I can do other things, too!” That’s one reason he’s considered unpredictable and untrustworthy, and that’s why they fear he might, if he thought it would help him, settle in the political center and maybe even sit down at a negotiating table with Vladimir Putin or the regime in Tehran.

And they could be right, but that’s also what makes Donald Trump politically less dangerous than Rubio or Cruz. Nevertheless, may the American voters prevent a President Donald Trump!