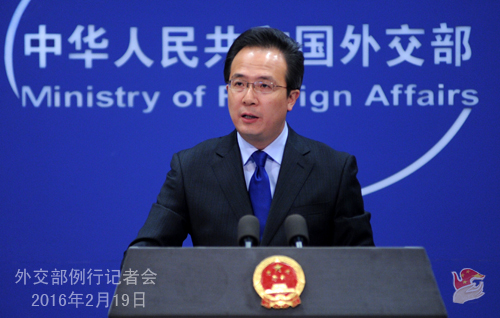 Question: According to reports, on Feb. 18 U.S. State Department spokesman John Kirby said that pictures from a commercial satellite clearly showed that guided missiles had been deployed on Yongxing Island, demonstrating that China has not ceased militarization. Similarly, he claimed that China has not adopted any measures to stabilize the situation. What is China’s response to this question?

Answer: China’s sovereignty over the Nansha Islands (Spratly Islands) and its surrounding area are supported by history and international law. China’s declaration that it has no intention of engaging in the “militarization” of the Nansha Islands is entirely serious and earnest. But things are just as the head of the Bureau of Foreign Affairs, Wang Yi, said yesterday. Non-militarization is not to be done by only one country, we must not apply double or multiple standards. This process will require the hard work and cooperation of countries in the region as well as related countries from outside the area.

However, the present circumstances are as follows. America continues to strengthen its forces in the South China Sea, frequently dispatching military ships and aircraft into the South China Sea region. These forces conduct high frequency missions toward China that are very similar to military reconnaissance. They have also on multiple occasions dispatched guided missile destroyers and bombers that have encroached on and at times even entered into the adjacent sea and airspace of China’s Nansha Islands. America has time and again enticed and pressured its allies or partners into highly targeted “Joint Military Exercises” and “Joint Patrols.” These activities have aggravated the tense situation in the South China Sea, and it is only as a result of them that China has engaged in the “militarization” of the South China Sea.

Yongxing Island is the inseparable territory of China. In 1959, the Chinese government established an administrative body on Yongxing Island and afterward its governmental facilities. Over the years, China has constantly been developing and constructing the necessary defense forces for the island. The countries and people with an interest in this matter ought to first educate themselves about the basic points and fundamental facts of the South China Sea’s history before they make any statements.

Question: On Feb. 18 President Barack Obama signed a new bill imposing sanctions on North Korea which included freezing involvement in North Korea’s nuclear program and provides funding to human rights abuse monitoring personnel. Does China have any comment on this?

Answer: I have paid attention to the relevant news. Currently, the situation on the Korean Peninsula is both complex and sensitive. The parties involved ought to continue to exercise self-restraint and cool-headedness, as well as persist in inter-party talks to resolve the direction of this issue.

China believes that no matter which hot button issue it is, no one can achieve fundamental resolution through pressure and sanctions alone. Any action that harms a third party’s legitimate interests will not help resolve the issue, and will only serve to make the situation even more complicated. We urge the related parties to exercise caution and prudence, as there is no need to create artificial trouble.

Question: In response to China’s deployment of guided missiles onto Yongxing Island, Australia and New Zealand have both requested that China exercise restraint on the issue of the South China Sea. What is your response to this?

Answer: The islands in the South China Sea have been the inseparable territory of China since ancient times. China has the authority to protect its rights and interests in accordance with the law. If China deploys the proper and necessary national territorial defensive installations on its own soil, this is exercising the rights endowed by international law for sovereign nations to practice self-defense and self-preservation. This is not engaging in “militarization.”