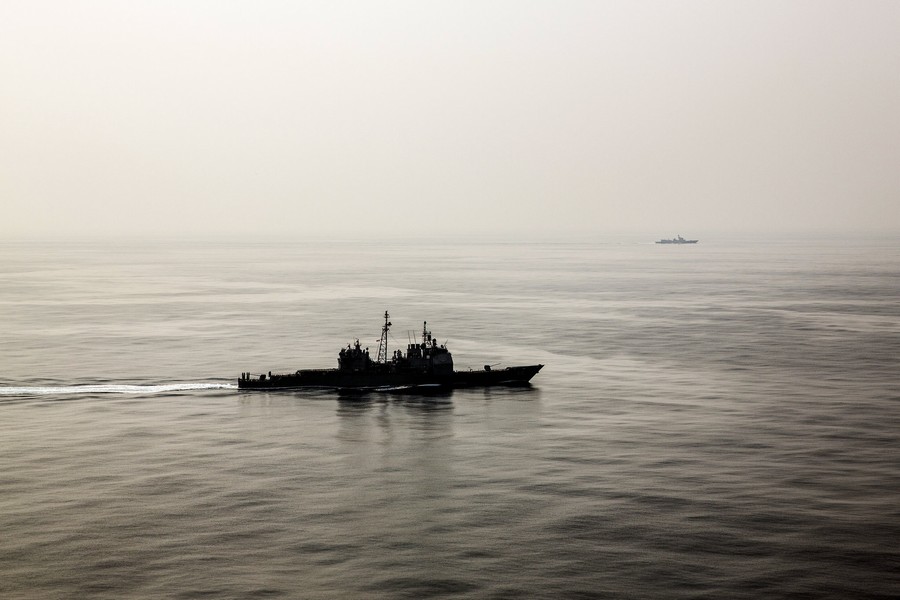 It is not hard to see that the reason that The New York Times can report this is because the United States military provides reporters special interview access and even provides reporters with the names and military ranks of warship officers, including the name of a Chinese American officer. The U.S. military is relying on this Chinese American officer to send Chinese language messages to Chinese warships that are following U.S. warships. Cooperation between the United States military and the media is taking place, of course, not in order to provide neutral reporting. It is taking place to promote the United States’ view on the South China Sea and to exaggerate the theoretical threat of the Chinese military.

The New York Times is very supportive of America’s position. The Chinese headline for the article was: “Dangerous Greetings: Encounters Between Chinese and American Warships in The South China Sea.” The article included a detailed description of a high-ranking American military officer’s views on what he called “a tense situation.” The time that the report was published was also specially chosen by The New York Times, which ran the article on the day that President Xi Jinping was to visit the United States. At almost the same time, a news analysis about the South China Sea headlined “Meeting Between Xi and Obama Focuses on the South China Sea — Will China and The US Head Toward Restraint?” was published.

You can imagine that the Internet and international media will now all be quoting these two articles, especially the first one, because it has many seemingly juicy details about the communications between Chinese and U.S. naval vessels. Next, readers of this article will have a more complete understanding of the U.S. position on the South China Sea and might even agree with the newspaper’s suspicions about China’s policies in the South China Sea.

Of course, China’s media can let readers around the world judge for themselves who is truthful and more reasonable by refuting the claims made by The New York Times or by using firsthand information. But today, when things spread rapidly over the Internet, refuting something can sometimes cause the person who is being refuted to receive even more attention and draw an audience to the original article. Doing this can have positive effects, but it will usually have little impact because of an inability to properly set the agenda. In the long term, a passive response implies that any initiative to launch an attack has been abandoned, decreasing the power to influence public opinion.

Within modern arenas of public opinion, controversies are time sensitive, especially controversies about the power to set an agenda. By using key materials and dissemination methods to send out information at key times, you will have already won the battle.

The South China Sea conflict is an important issue in China-U.S. relations and there is no way to get around it. If the Chinese media want to strengthen its ability to effectively promote China’s position on the conflict, then it must have the mentality and ability to set the agenda. Furthermore, the media’s ability to do this requires more support by the government and the military. Imagine, if the reporter from The New York Times didn’t have support from the U.S. military, how could the reporter have acquired so much detailed information?

Taking a step back, we must increase our speed, power and abilities to refute reported information, but even more than that, we need to cultivate the power to set the agenda. The media should recognize that the ability to set the agenda must be elevated to the level of strategy and should become an effective mechanism.

The author is a senior reporter for the People’s Daily and a senior research fellow for Chongyang Institute for Financial Studies at Renmin University.