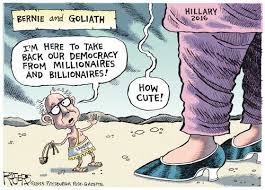 The standoff in the Democratic primaries is damaging the former first lady’s popularity. Nevertheless, unless she suffers a surprise defeat in New York in mid-April, she is virtually certain of being awarded the nomination.

Convinced Hillary Clinton is guaranteed to win the Democratic presidential nomination, all her advisers are simply waiting for Sanders to stand down, as this would allow the former secretary of state to focus her energy on defeating Donald Trump. However, the Clinton camp will have to come to terms with the fact that Bernie Sanders, who has just had the best week of his campaign so far, has no intention whatsoever of throwing in the towel or toning down his attacks on the Democrat front-runner. Having already won in Idaho and Utah last Tuesday, the Vermont senator triumphed in the three Democrat caucuses on Saturday, in Washington, Alaska and Hawaii. In each of those caucuses, he won with a margin of at least 40 points. The first lesson in understanding Sanders’ success comes from the caucuses: these small local gatherings, where voters are required to arrive at a specific time and then stay until the end of the process, have gone decidedly well for the socialist senator, who has won 10 out of a possible 14, thanks to the zeal and motivation of his supporters.

While the three victories for the elected representative of Vermont were predictable, the scale of the victories has allowed him to claw back some of Clinton’s lead in the race for delegates. According to some estimates, Bernie Sanders could reduce the gap, which stood at approximately 300 delegates on Friday, by one-fifth, or possibly even a quarter. This weekend, a pumped-up Sanders announced to his supporters: “Don’t let anyone tell you we can’t win the nomination, or win the general election. We’re going to do both of those things.”

The Clinton camp is not panicking about the five defeats they suffered during the week. They remind themselves that the former first lady has won five of the seven decisive swing states for November’s presidential election, including the top three swing states (Florida, Ohio and Virginia). In addition, they keep repeating that, to date, Clinton has attracted more voters than any other candidate. “I have gotten 2.6 million more votes than Bernie Sanders,” the favorite to win the Democratic nomination pointed out a few days ago.

Another bonus for Clinton is that the calendar for the remaining ballots appears to work in her favor. Only three caucuses are left – Wyoming, Guam and the Virgin Islands – all of which are fairly insignificant. Most importantly, of the states yet to vote, the four that offer the most delegates – New York on April 19, Pennsylvania on April 26, and California and New Jersey on June 7 – have a high proportion of African-American and Hispanic voters. Logically, this should be an advantage for Clinton. At the moment, opinion polls predict she will win those four states, making her final victory a certainty.

Nevertheless, Sanders still believes that he has a chance, and he’s not alone in thinking that. Over the past few days, his rallies have attracted 12,000 supporters in Portland, 13,000 in San Diego and 17,000 in Seattle. Each time, the magic happens: Sanders receives a rock star welcome and the young crowd is galvanized by the candidate’s social program (free education and healthcare and statutory maternity leave). This level of passion is still sadly lacking among Clinton’s supporters.

Aware of her lack of popularity, the former secretary of state has, over the past few months, tried to steer her campaign further to the left, but this has had limited success. Ideally, at this stage of the campaign, she would have wanted to be the only one left in the race, so she could unite the Democrat camp and convince Sanders’ voters, particularly young people, to back her. Instead, she will have to fight a fierce battle in the state of New York. As has been the case after each victory, Sanders will currently be enjoying a surge of online donations, which will primarily go toward financing his advertisements in the expensive New York media market. The ultra-hyped New York primary, scheduled to take place in three weeks’ time, looks like it may determine the final outcome. If Sanders is beaten, he will lose virtually all hope of catching up with his rival. Conversely, a defeat would be embarrassing for Clinton, as she was the senator of New York from 2001 to 2009, and her campaign headquarters are situated in Brooklyn.

In order to defeat Clinton on her own turf, Sanders plans to conduct an all-out campaign which will include multiple rallies and caustic attacks, including an attack on the former secretary of state’s troublesome links with Wall Street. By doing so, he hopes to mobilize the large number of Democrat and independent voters who do not trust Clinton. According to a CBS-New York Times national poll released last week, only 31 percent of respondents had a favorable opinion of Clinton, compared with 52 percent who had an unfavorable opinion. Only Trump fared worse, with a popularity rating of just 24 percent. This is not the least of the contradictions in this campaign: If the two current favorites win the nominations for their respective parties this summer, the two most unpopular candidates in the country will face each other in November’s presidential election.