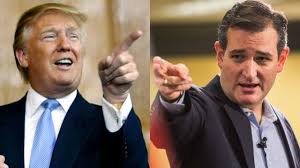 Here’s why Europe should pay attention to the sand table mock-up battle for the White House involving two grown men and the anger of the silent majority.

Two blue plastic banners in English and Spanish flutter overhead reading, “Bernie for President 2016.” In an adjacent auto repair shop on a quiet side street in Brooklyn, N.Y., the campaign headquarters of liberal Democratic candidate Bernie Sanders has opened for business.

On this spring morning the high-ceilinged room is full of youthful volunteers manning computers and telephones. They are highly motivated, belonging to that group of predominantly young people who expect the senior Sanders to change the whole political system of the United States of America.

Simultaneously this week, Hillary Clinton’s fans assembled at New York’s Apollo Theater where on other days the popular amateur talent show “Good or Gone” takes place; it’s either applause or get run off the stage. There’s nothing amateurish about Clinton’s show. Her campaign machinery is well-oiled and the applause is assured. Nothing could better illustrate the leitmotif of this political struggle than these two scenes: It’s all about the establishment’s desire to keep possession of political power and the opposition’s drive to take it away.

The same holds true for the Republicans although it may not look that way at first glance. For days now, a dispute has been raging between billionaire Donald Trump and Texas Sen. Ted Cruz over their wives, fundamentalist Christian Ted Cruz’s alleged five extramarital affairs and who started mudslinging in the first place. Or as CNN journalist Anderson Cooper described it, “the argument of a 5-year-old.” The truth is, it’s an argument about establishment politician Cruz and alleged “outsider” Trump. What the liberals expected from Sanders the conservatives also hope to see from Trump.

Everything is about emotions, rage and vague expectations. It makes no difference whether or not the tax and social systems Sanders promises can be financed. It makes no difference whether Trump’s former adviser, Stephanie Cegielski, is right when she urgently warns his supporters in an open letter that Trump was originally using his candidacy only as a bluff in order to further his business interests and was himself surprised by his own success. She closes the letter by saying, “He is the best at looking out for Donald Trump — at all costs. Don’t let our country pay that price.”

On both sides, Democratic as well as Republican, the political leadership underestimated the monstrous anger of the silent majority. Many expectations over the past decades have gone unfulfilled and will now remain so. Incomes and living standards keep declining even as employment rates rise; home ownership and education costs for children and grandchildren are no longer possible without incurring heavy debt. Every aspect of daily life is affected from health care to pensions. A feeling of hopelessness has become entrenched among the young as well as the old. That drives a major portion of the electorate to extremist fringe positions.

Trump’s rise comes as a sudden surprise to many as does Sanders’ success and the bitter fight Clinton must now wage against him. But the game is far from over. Fans of the U.S. series “House of Cards” know what can still transpire among Republicans: An open convention with the presidency up for grabs by any and all. The Democrats could see Sanders run as an independent because he’s not dependent on deep-pocketed donors. The result would be instability.

And why should Europeans be interested in that? Because of signs that something similar may be emerging in Europe. Because crises are breaking out all over, and in a recent TV interview, Donald Trump refused to rule out using nuclear weapons.