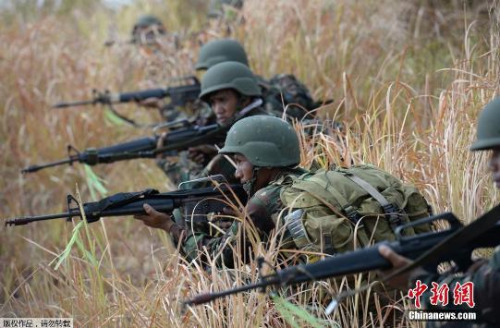 In a report on April 5, China News reported that the United States and the Philippines will hold “side-by-side” joint military exercises inside the Philippines with Japan attending as a third party observer. The three countries are becoming more intimate with regard to defense cooperation; what calculations are they each making?

Historically, the Philippines was a colony of the United States and in 1998, both countries signed the Visiting Forces Agreement. The United States military often cites this agreement as the reason for traveling in and out of the Philippines and rotating troops to extensively expand its military presence in the Philippines. Side-by-side military exercises are a large-scale routine annual occurrence, in which joint U.S.-Philippine military exercises take place. It began in 1991, ceased in 1995, was reinstated in 1999 and has thus far taken place 32 times.

But the military exercises that took place in 2015 are the largest in scope in 15 years, with about 120,000 men participating. This military exercise is also part of the Unites States’ proposed “Pacific channel” Asia-Pacific rebalancing strategy and includes a series of military training exercises with Asian allies as well as the new deployment of American troops in the Asia-Pacific region.

This time, there were 10,000 Australian, Filipino and American soldiers participating in today’s side-by-side exercise, including 3,773 Filipino soldiers and 4,909 American soldiers. Japanese troops played the role of observers in this exercise. The vice director of military exercises, Santiago, said this military exercise will have the greatest scope in history, and “is not directed at any country.”

Philippine Vice Commanding Officer Lopez has openly said that today’s side-by-side military exercise has been greatly expanded both in scale and power, which will allow the Philippines to test new technologies, give it opportunities to provide equipment, and will help its military to increase its power, allowing the Philippine military to switch its focus from national safety to territorial defense.

Other news reports have said that the United States military will dispatch the HIMARS motorized cannon platform during the live ammunition portion of this military exercise. This will be the first time using the M142 High Mobility Artillery Rocket System, also known as HIMARS. But a spokesman from the Philippines military said that the military has not yet received information about how many HIMARS the United States will dispatch. In addition, “seizing islands” will also be one of the exercises that the Philippine troops will be performing.

Not long ago on March 29, Japan’s new security law came into effect and officially lifted the ban on military defense, expanding the Japanese Armed Forces’ freedom of navigation abroad. Regarding this, Searight indicated that the government of Japan’s Shinzo Abe has always tended to see defense cooperation with the Philippines, Vietnam, and other ASEAN countries as important. But he also believes that after the new security law comes into effect, the Japanese government will not alter defense policies too soon.

Relationships Becoming Closer by the Day

This year, Japan and the Philippines have had what could be considered frequent interactions in the military realm and their relationship is becoming closer. Last year, both countries held the first joint naval exercise in Manila Bay and Subic Bay in the Philippines, after which they again held joint military exercises in the South China Sea. Japan Prime Minister Abe and Philippine President Benigno Aquino III have also visited each other.

This February, both the Japanese and the Philippine governments signed the Defense Equipment and Technology Transfer Agreement, the first arms agreement between the two countries. In March, one Japanese super submarine called “Qinchao,” along with two escort ships visited Subic Bay in the Philippines during their annual drills in international waters. Foreign press has even defined the Philippines as having made Japan an “important allied country” in Southeast Asia.

In response to this, France’s European Times published an opinion saying that because of historical reasons, Japan is poised to receive much attention. After being able to lift the ban on military self-defense, Japan must increasingly see national security as an important concern and must proceed with caution in the realm of military security to avoid increasing political risks in the Asian region. If not, the new security laws could very likely pull Japan into conflict and war and run counter to efforts for peace.

Other analysis has pointed out that the frequent aid provided by United States military exercises has effectively created an integrated military alliance network, giving the United States the freedom to carry out deployments anywhere within that alliance network, to the point where they can badger certain countries into becoming their “pawn” in order to help realize their strategies. Some analysts say that the U.S. is turning the Philippines into a platform for deploying military force in Asia under the guise of military exercises. But the Philippines still hopes to prop up its own illegal stance by aligning tightly with the U.S. and Japan, muddying the waters of the South China Sea conflict, and receiving aid from the intervention of foreign military powers.

The actions of the Philippines, Japan, and the United States have drawn international attention, reflecting the complexity and sensitivity of the South China Sea and other regional circumstances. The three countries each have their own plans, and their influence on the situation in the surrounding area cannot be disparaged. Only long-term peace and stability will be acceptable as part of today’s worldwide developmental trends.