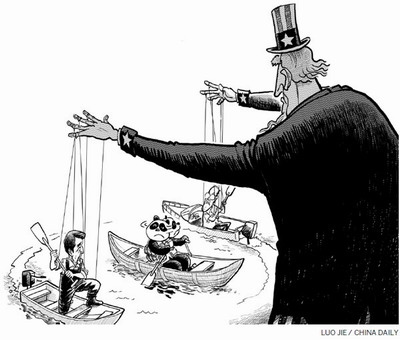 The Shanghai Cooperation Organization’s Council of Foreign Ministers released a communiqué on May 24, and in discussing the South China Sea issue, the communiqué held that legal order in the seas be upheld on the basis of international law that includes the U.N. Convention on the Laws of the Sea. The position of the communiqué is somewhat related to the controversy that all respective sides ought to reach a peaceful solution through amiable negotiation and consultation, as opposed to interference of international and external pressures. The communiqué urged all parties to scrupulously follow the Declaration on the Conduct of Parties in the South China Sea and implement all the subsequent declarations’ actions and clauses.

The process of the SCO’s opposition to foreign influence in the South China Sea issue is clearly supportive of China’s own stance. As America and Japan attempt to use the G7 as a platform to exert pressure on China, the Council of Foreign Ministers demonstrated an all the more reasonable face of international opinion, exposing the falsehood America and Japan have tried to manufacture: that global public opinion “all opposes China.”

The South China Sea has already become a major strategic feature of the Sino-American game of chess. Early on, America moved to rouse its “South China Sea circle of friends” and construct for itself a beneficial global opinion. Given that China has consistently opposed the internationalization of the South China Sea issue, it never took any reciprocal actions on its end. However, if we really will take the reasoning of the South China Sea and lay it in a global context, then China’s friends are certainly greater than America’s.

What is even happening in the South China Sea? America says that China is bullying its smaller neighboring countries, and is unilaterally changing the status quo in the South China Sea. China says that while we are willing to peacefully negotiate and resolve conflicts with other claimants, America is an external force that should not interfere in the dispute, especially not to flex its muscles and act in the main role. Which of the two sides is more believable?

It is clear to the entire world that China’s power is overwhelmingly greater than those of other claimant nations, but China does not use military force, and the isles we control in the Nansha Islands* are fewer than Vietnam and the Philippines. Even though we are expanding some of those islands, Vietnam is also doing the same, and island land reclamation is a regular occurrence worldwide. Is this really the bullying of smaller countries that warrants the American dispatch of warships and plans to pressure China?

Moreover, America, as an external force interfering in the South China Sea, has inappropriate goals and is further aggravating the tension therein. Such Chinese accusations are quite familiar to the common people, and must be all the more believable. The South China Sea is right at China’s doorstep, an extreme distance from America. America in the South China Sea does not benefit the region’s nations and people; the whole world cannot believe that America has such high consciousness and manner. People know much better the strong-arming America that flies such lofty flags [as justification] for its own ends.

Justice lies in the will of the people. There has been no armed chaos in the South China Sea. The Sino-Vietnamese conflicts are most numerous, but the two countries are simultaneously strategic cooperative partners. The probability of military conflict between China and the Phillipines is also remote. Today, the greatest risk of military clashes in the South China Sea is brought by the United States. As the risk of a small spark igniting a great blaze between China and the United States rises, this is the shared analysis of the rest of the world. America came to the South China Sea in order to strategically deal with China, and the people of the world are not idiots who cannot see this.

China certainly can outmatch America in the arena of “rousing friends.” China is quite magnanimous; we are protecting our own national security in the South China Sea, whereas America comes to protect its global hegemony. Time will tell which of these two motivations is the more able to invite global sympathy.

If China and the U.S. do clash outright in diplomacy over the South China Sea, the easiest force for America to utilize comes from the G7 and a few Asia-Pacific allies, plus a few claimant countries in the area. China can count on not only the SCO, but also BRIC’s,** and can find sympathy and supporters among countries in Africa, Latin America and the Middle East. In the end America cannot outdo China in an extended state of affairs in the South China Sea.

America also ought not use military force to intimidate China. America is powerful but in the end is just a paper tiger. The South China Sea, located at China’s side, will prove this to the world. In short — affairs in the South China Sea are to be handled by the discussion and work of the countries in the region; there is no place for America to gesticulate. The Chinese people have made this decision, and moreover are patient enough to wait for America to try to understand.

*Editor’s Note: The Nansha Islands is another name for the Spratly Islands. A number of countries within the region (Vietnam, Brunei, Taiwan, China, Malaysia and the Philippines) claim some degree of ownership of these Islands and thus they go by many different names. Nansha is how they are referred in China.

**Editor’s Note: BRIC is an acronym for Brazil, Russia, India, and China. In some cases, this is expanded to include South Africa and therefore referred to as “BRICS”. These nations are often grouped together due to their relative wealth and stage of economic development.