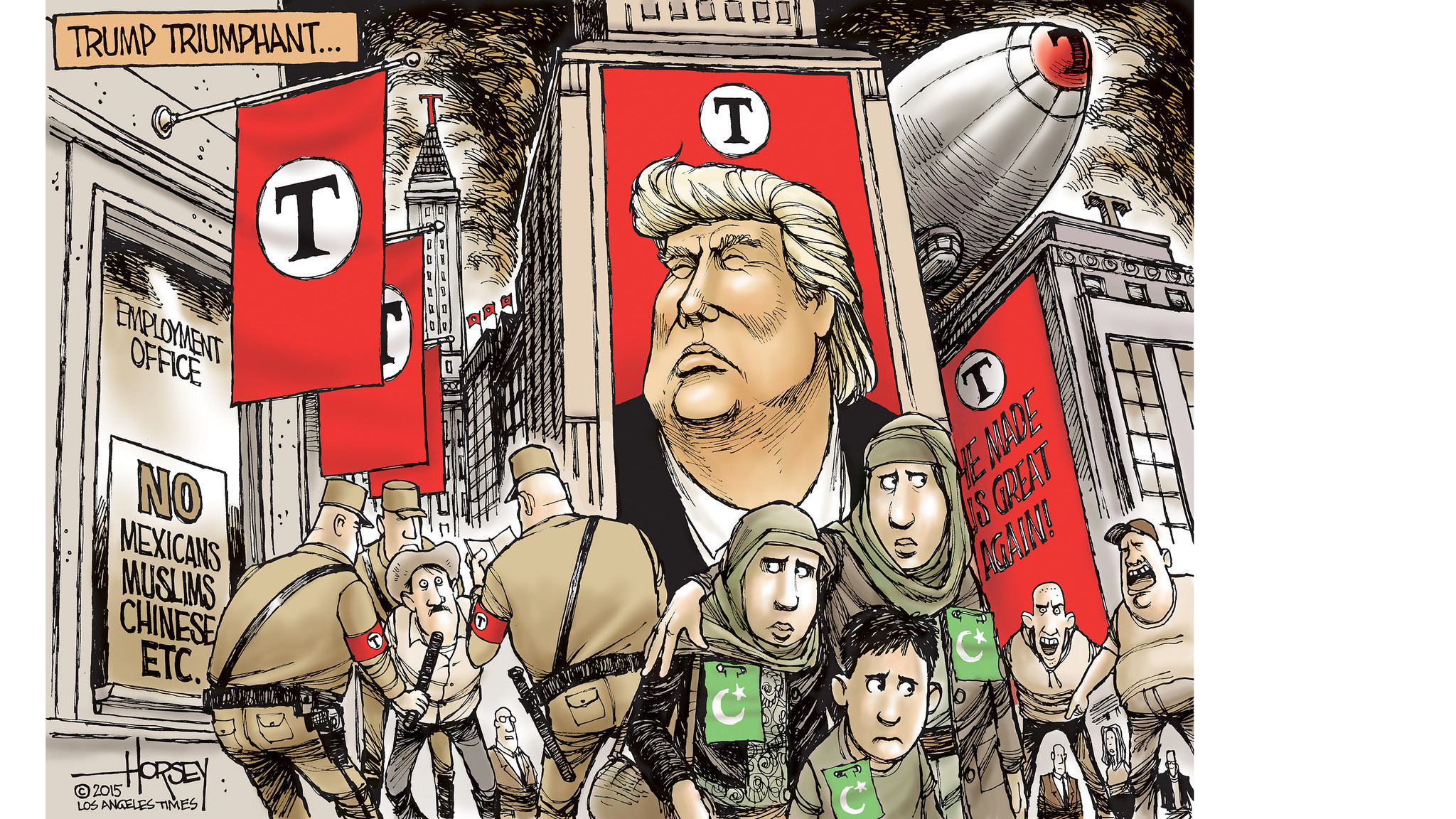 Donald Trump’s success in the United States is indicative of a new fascism, different from that of the ’30s, but just as debilitating to liberal democracy and the rule of law, according to Pierre de Senarclens, an honorary professor at the University of Lausanne.

Not long ago, Robert Kagan, an American conservative intellectual, argued in The Washington Post that fascism was on the rise again in the United States in the form of growing support for candidate Donald Trump, for his hate speech devoid of any real ideological content, for his contempt of democratic values, for his erratic positions, and for his machismo and tendency to encourage the uncontrollable passions of the masses.

I think Kagan is right. Of course, Trump’s militants are not uniformed and marching rhythmically in the streets of American cities. They refrain from raising their arms to salute their political leader; they are not yet organizing punitive raids against their detractors. They aren’t claiming living space, nor a 1,000-year empire, nor a mythic race. Their taste for the heroism of the battlefield is not manifest.

A Pure and All Powerful Nation

Nevertheless, Trump’s supporters are seeking strong, threatening, and simplistic leaders. They exalt physical force, especially that offered by firearms, and the conventional attributes of virility. They demand burning nationalism. They dream of a purified, all powerful nation capable of confronting all external challenges. They inflame the sphere of collective emotions.

Today’s fascism is not a new resurgence of the pernicious claptrap of the past. It is adapted to the modern mentality that, under the influence of consumption and leisure, individual desires should no longer be suppressed. This fascism is nevertheless intimately linked with populism and is echoed in every class of the population, not only among the socially and culturally vulnerable.

No Better than a Gang Leader

Trump’s position is fundamentally hostile to every form of liberalism, economic and political. It is essentially the explosion in public life of instincts and urges contrary to ordinary civil relationships. It entails the abandonment of the rules of behavior that make life in society possible. It glorifies aggressive behavior and looks down on all attempts at rationality. It is nourished by intergroup hatred and racism. It flourishes in the mob. It entails systematically refusing all the restraints of civilization. It cultivates irrational emotions, ideas, and behaviors. It gives free reign to vulgar and outrageously aggressive attitudes.

This is Trump’s position. If he didn’t have lots of money, much of it inherited, he would be a street thug, destroying cars, breaking windows, and making a living off of petty theft. In this day and age, how could this person, who is no better than a gang leader, set his sights on the presidency of the United States?

The typical response to this question is well known. The middle class, the lower middle class, and the poor are victims of growing disparities within the heart of American society, of political blockades that provide a small minority of rich people with exorbitant advantages. A huge part of the American educational system is in a lamentable state. The media barely have any autonomy anymore, and the great majority of the American public is woefully misinformed.

Fascism attracts people of limited cultural education. It largely seduces psychologically rigid individuals, those who need a great deal of certainty, those who have trouble abstracting and recognizing the ambiguous aspects of reality. Typically having fragile personalities, they tend to exaggerate the importance of their culture and values over those of the people they view as alien. They are thus seduced by the stigmatization of Mexicans, Muslims, Arabs, and refugees. They display, overtly or not, a contempt for women.

One would be very wrong to overlook the danger that Trump’s election as president of the United States — or even the persistence in the heart of American politics of various movements hostile to the values of tolerance, the standards of democratic debate, and the ideals of rationality and civility — would pose.

Contrary to a persistent myth, the checks and balances are no longer working in Washington, notably because of the completely excessive influence of lobbyists on Congress and the huge role played by money in the election of representatives and senators, as well as the populist leanings of the Republican Party.

This threat is even greater given that fascism is on the rise in many other regions of the world. One thinks of the terrorism of religious fundamentalists, those who mobilize under the banner of Salafism, of the violence of the immigrants advancing into the occupied territories of Palestine, of the nationalism and the demagoguery of Putin and his supporters, and of the senseless behavior of the hooligans and troublemakers involved in street protests.

More widely, the demagogic propaganda and the attitudes of the “sovereignist” parties against foreigners and refugees — those of the Central Union and the National Front, for example — also include fascist traits because they feed all kinds of crackpot emotions and ideological inconsistencies.

Liberal democracies and the rule of law that they require are again very fragile. In these circumstances, the specter of an America unable to sustain them and encumbered by isolationism becomes very troubling. This is especially true for the European Union, which has no policies of defense or security worth noting, while its institutions and its unclear policies hinder economic and social progress.