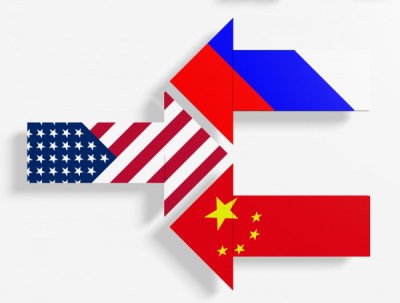 Only half a year remains in U.S. President Barack Obama’s final term in office, and his domestic approval ratings are on the rise. An examination of the foreign affairs legacy he will leave behind, however, reveals that he has not led the world toward peace, but instead walked the old path of confrontation between opposing coalitions.

A key facet of Obama’s legacy will be how the souring of U.S. relations with both the Chinese Communist Party and Russia under his captaincy has brought Beijing and Moscow far closer together. Strategically, the last thing the United States wishes to see is a pact between China and Russia that could act as counterweight against the United States. Unfortunately for Washington, what was an impossibility over the past several decades has now become possible.

Such a shift in the strategic landscape was not an inevitability, but the result of a long string of misguided U.S. policies. Many of those missteps had their origins in the United States’ chronic lack of respect for its differences with the outside world, as well as its underestimation of those seated on the other side of the board.

First, U.S. policy on Ukraine transformed Russian attitudes toward the West. Former Soviet leader Mikhail Gorbachev was once rather cozy with the West and bluntly outspoken about Putin. During a recent interview with the New York Times, however, he had strong words for the United States, feeling that post-Cold War Russia had been betrayed. The United States had styled itself the victor and treated Russia like a liberated serf, as well as dispatched NATO forces to the Russian border, he said.

And the United States has lacked a delicate touch in dealing with historical relations between Russia and Ukraine, becoming excessively involved in Kiev’s politics. With little thought for Russia’s concerns, the United States only managed to cause divisions within Ukraine and tear a schism between the United States and Russia that will be difficult to bridge.

Similar scenarios unfolded with the Diaoyu Islands and the South China Sea. With regard to Diaoyu, in 1978 Deng Xiaoping visited Japan and suggested that it would be wise for both sides’ governments to sidestep the conflict, as no harm would come from shelving the issue. For many years afterward, the CCP and Japan did indeed set aside the dispute, a truce that held until September 2012, when the Japanese government nationalized Diaoyu and bilateral relations took a sharp turn for the worse.

In the Chinese-Japanese standoff over Diaoyu, the United States should have advised Japan to adopt a more prudent course. Instead, it poured fuel onto the fire, with the secretary of state, defense secretary, and even Obama all publicly stating that Diaoyu fell within the purview of the U.S. security agreement with Japan. Such a posture struck some of Beijing’s most sensitive nerves, as it prizes its territorial sovereignty. For a long time, Japan essentially held the Diaoyu Islands, and Beijing was content to put a pin in the issue so long as no special attention was drawn to it. But when Japan made that pin a knife twisting in the side of its larger neighbor, and with the United States throwing the full weight of its support behind Tokyo, the CCP had no choice but to respond in kind to save face.

When the Philippines brought its South China Sea case to an international court for arbitration in early 2013, Beijing was convinced that the move had been choreographed by Washington, for the Philippines would not have dared do so otherwise. As far as the top brass in Beijing is concerned, sovereignty disputes over the South China Sea have been a long time in the making, and land reclamation has hardly been the sole undertaking of the CCP, but has also been done by the Philippines, Malaysia, and Vietnam, which have constructed airstrips on the shoals and reefs in their possession. Just as with the Diaoyu issue, Beijing is convinced that the attribution of all blame to them by the United States is unjust, and must be part of a larger plan.

At the end of 2013, the CCP began accelerating its campaign of artificial island construction on reefs in the South China Sea, and the constantly expanding land features can be seen as its countermeasures to inimical U.S. policies. Another consideration for Beijing is naturally that it places significant weight on the strategic value of those reefs and shoals. Its efforts to complete island construction are spurred on by fears of falling at a disadvantage, but in so doing, it has invited protests from neighboring states.

From the Diaoyu Islands to tensions in the South China Sea, if the United States in its capacity as a world leader had been more adept at conflict resolution, events would not have progressed this far. Beijing in this period of economic transformation is in dire need of a stable surrounding environment, and is hardly able to knock the United States off of its seat at the top of the totem pole. And yet, affronts to the CCP in the form of constant displays of U.S. naval power have led to neither side being willing to back down. The South China Sea is now slipping quickly into a vicious cycle, a treacherous maelstrom that grows more dangerous by the day. Even if an announcement is made on the pending arbitration case, it will only engender another round of confrontations.

The CCP and Russia were once close to the United States, but U.S. actions have since driven the two mutual adversaries into each other’s arms instead. The reality of the situation is that neither Moscow nor Beijing will be able to supplant the United States as a hegemon in the short term, and undue containment will only lead to increased friction. The United States should manage its relations with the CCP and Russia through more refined and flexible policies rather than treat them as enemies and incite more nationalistic sentiment. If the next U.S. government does not change its tune, the slightest miscalculation may very well jeopardize security and economic welfare throughout the region, as well as have deep and far-reaching effects on the nature of great power relations.

The author is a professor at National Taiwan University’s department of political science.