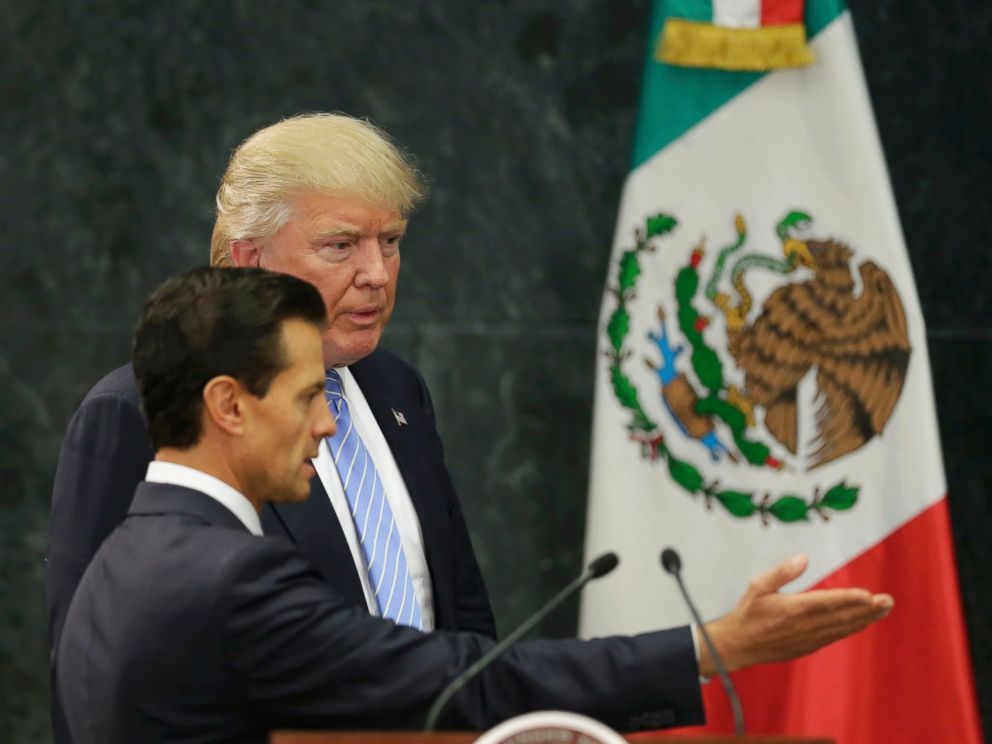 Donald J. Trump managed to break the mold in U.S. politics in more ways than one when, in the same day, he went from expressing gratitude for the contributions of Mexican immigrants to repeating his brutal promise to deport several million undocumented aliens if he is put in the White House.

The controversial decision by President Enrique Peña Nieto to provide a stage for him in Mexico notwithstanding, Trump’s return to the intolerant and xenophobic discourse with which he swept the Republican primaries showed the true social context for the election on Nov. 8 of the next U.S. president.

The issue can be addressed on several levels, beginning with the election itself. The few Republican establishment leaders who are still with Trump have suggested that he tone down his proposals in order to attract moderate voters. Until his visit to Mexico, he was following that script. But when he returned to Arizona, he recapitulated his promise to build a wall on the border and create a special force to carry out deportations. In so doing, Trump showed that his priority is to retain the hard core of resentful white voters that won him the nomination, although the flight of moderate Republicans — including some to his rival, Hillary Clinton — cuts off some of his possibilities. This is the same limit faced by many European ultranationalist groups.

This brings us to a second level of analysis, one that is more political. For Trump’s followers, immigrants (13.2 percent of the population) are the scapegoat for a society hammered by globalization, which cuts jobs in social groups that formerly enjoyed economic security and cultural superiority over minorities. Even though the Obama administration deports more than 400,000 foreigners a year, it still is described as ineffective by Trump’s supporters.

From a distance, it is tempting to think that this is about the adventures of a narcissistic millionaire, which will fall apart at the ballot box. However, the United States today, with its unprecedented concentration of wealth, is very open to simplistic slogans and falsehoods, especially those that feed the tension between “us and them.” And it’s not just social discontent. Fear — of the foreigner, of terrorism, of unemployment, or simply of the different — carries as much weight as the traditional core beliefs of the two major parties.

If we widen our view to encompass a historical perspective, we find that the United States has already seen candidates with very extreme views. Two examples, both from 1964, are Republican Barry Goldwater, founder of the conservative orthodoxy that paved the way for Nixon, Reagan and the two Bushes, and Democrat George Wallace, standard bearer of the resistance to the civil rights movement.

But this time, it was a media millionaire without any political experience who came through as the candidate of one of the two major parties, and steamrolled over a dozen rivals. Furthermore, his improvised heterodoxy on issues of foreign policy, commerce, taxes, education and security has wiped out the Reaganesque ideology that had defined Republicanism. In this sense, Trumpism is definitely something new.

The association with the European ultranationalist movements that harp on the story of the guilty immigrant, and position themselves as the popular alternative to the traditional political establishment, becomes relevant. It is a part of the same phenomenon that is working its way through the developed West, but in crisis mode. The recent defeat of Angela Merkel’s party in her own home territory by xenophobic German ultranationalists of the AfD [Alternative for Germany] is further proof of this.

Those European parties have also run up repeatedly against the limits of their own extremism, hostages to an ultranationalist rhetoric like that which Trump is now reiterating. But the failure of the political response to the undeniable crisis in the neoliberal model in its different variations, as we have already seen in France or in Austria, can test these limits.

These are the same limits that can slow Trump down. He won’t change; neither will his supporters. But the rest of the voters still can.

The writer is the president of the Open Embassy Foundation. He is the former ambassador of Argentina to the United Nations, to the United States, and to Portugal.