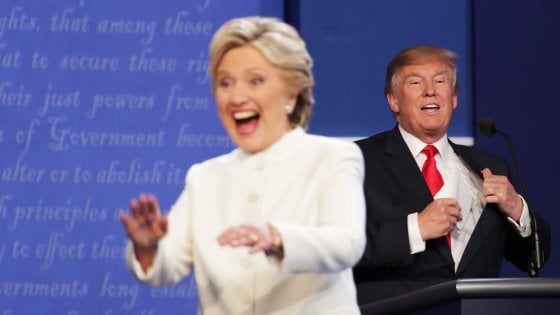 Mutual accusations and harsh tones. The third debate favors the Republican candidate, but it remains to be seen if this will be enough to reverse the trend that sees him falling in the polls.

“This election is rigged…I don’t know if I will accept the result…It depends. I’ll let you know when the time is right…Hillary should never have been allowed to run for the presidency,” says Donald Trump. The third and final television debate between Hillary Clinton and Trump ended in a brawl. “It’s horrible. That’s not the way our democracy works. He’s denigrating, he is talking down our democracy,” the Democratic candidate replied in opposition to her rival’s divisiveness. Threatening to make an unprecedented gesture, Trump’s refusal to say whether he would concede victory to his opponent has never been seen before. The scorching Nevada weather (a summer heat wave) became even more fiery at the University of Las Vegas despite the air conditioning. That the debate was hosted by the right-wing Fox News and the fact that Trump felt at home (he owns a hotel casino here) perhaps helped to make this match the most favorable of the three for the Republican, showing him to be more confident in himself and often on the attack. It’s too early to tell if this is enough to reverse his decline in the polls. Third presidential debates are not usually decisive, as the number of undecided voters has thinned by this point. But this is an unusual election and the previous debates aren’t necessarily indicative.

The first ten minutes showed Trump as he has previously appeared at first, with a low voice and cautious tone. The initial exchanges slipped away quietly without interruption. On the topic of the Supreme Court, where a seat has been vacant for months following the death of Antonin Scalia because Republicans refuse to hold confirmation hearings for Barack Obama’s nominee, Clinton promised that if she wins, she will appoint a judge willing to overturn Citizens United, the infamous 2010 ruling that allows unlimited private financing of election campaigns. Trump instead promised to appoint a judge who will defend the Second Amendment’s right to bear arms. He said he was anti-abortion, she said “it’s not up to the government to make the hardest choice a woman must make…we should not become like China or Romania.” Up until now, the candidates have addressed their base, and Trump has done his best to reassure the Republicans and the religious right-wing about his conservative credentials.

The temperature began to heat up on the topic of immigration. Trump acknowledged “four women who are in the audience tonight and whose sons were killed by immigrant criminals.” He said that “we no longer have a border; we no longer have a nation.” Clinton told of having met a young girl right there in Las Vegas who was “terrified that her parents may be deported.” Clinton said she was not going to whip these families with the deportation force that Trump threatens to activate.

The exchange turned nasty on the subject of Vladimir Putin. Clinton called on Trump to clearly state that he condemns Russian espionage and that Moscow’s hacker interference during this campaign is unacceptable. Trump did not give in, but instead defended the Russian leader. “Putin, at every turn, has proved smarter than Obama and Clinton. I prefer to get along with the Russians,” Trump said.

“Putin wants his own puppet as president of the United States,” Clinton concluded.

From that point on, it often became a brawl, like the other two debates. On the economy, the two reaffirmed their antagonistic recipes: Clinton proposes a policy of wealth redistribution to finance public investment and the right to education; Trump points toward massive tax cuts for business. Even in this field, things got personal as, once again, Trump condemned the “worst commercial treaty in history, NAFTA, which was signed by Bill Clinton,” and Clinton accused Trump of importing Chinese steel for his hotels.

Trump leveled one of his favorite attacks: “You’ve been in power for 30 years and never did anything good, why would you do this now?” Clinton threw her dual career back in his face: “I worked alongside Obama during the capture of bin Laden, while you were the host of the TV show the ‘[Celebrity] Apprentice.’” Then, once again, Clinton brought up Trump’s sex scandals, involving nine women who have accused Trump of harassment. Trump retorted that it was all false and that it was Hillary who instigated them. Then he turned to counterattack, mentioning the 33,000 emails Clinton “has hidden” and described the Clintons’ philanthropic foundation as a “criminal enterprise.” In response, Hillary listed all the people other than women that the tycoon has offended. She noted that he insulted the parents of a Muslim U.S. Marine who died on the front line, that he mocked the disabled and he offended war hero John McCain. “You’re dark, you’re bleak, you want to divide Americans. I want to unite them,” Clinton said. And she branded him as “the most dangerous candidate in our history.”

But he hit back, describing an America where “the military is depleted, the policemen and women are disrespected, our inner cities are a disaster.” For those who have this pessimistic view of America, it was an evening in which Trump found determination and ferocity. However, what will remain since the salient feature that departs from tradition in this debate is the threat that Trump will not accept the final results of the election. Only if the “dishonest Hillary” wins, of course.