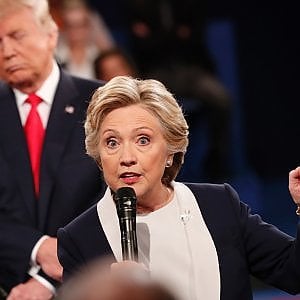 Not even the revelation of Trump’s sexist vulgarities right in the middle of the campaign managed to shift women’s votes. Hillary paid the price for the deep anger of a substantial part of America that feels betrayed by the establishment.

“Lock her up!” The chants of the crowd waiting for Donald Trump in New York sum up the anger that knocked down Hillary Clinton’s dream of a lifetime. She was stopped while on the verge of holding the most prestigious office after a steadfast career characterized by engagement, competence and a lot of power. She started out as an activist for the rights of young detainees, single mothers and disabled children. She was a pillar of strength for her husband, the president, in her eight years as the first lady at the White House. She served as state senator of New York from 2001 to 2009 and as secretary of state with Barack Obama from 2009 to 2013, the year when she started working on this year’s candidacy. This was a practically unbroken streak of positions of power with the Clinton Foundation in the background. It carried out important charity initiatives in her name and Bill’s, but also garnered donations, consulting assignments, and connections.

This is the true “original sin” that America could not forgive: Hillary Clinton’s power and strong association with Washington’s powerful. Many factors contributed to the surprising conclusion to the most resentful, deceitful and deviated campaign in the entire history of America. However, the Democratic candidate’s unpopularity was the most glaring element from the start. It was clear that it was impacting the campaign (though not to what extent) as it drove a rift between Hillary Clinton, the Democratic Party, even her predecessor Barack Obama and the majority of the country (at least the part that went to vote yesterday).

Therefore, America will not have its first woman president. That glass ceiling that Hillary was ready to point at in the hall where she was supposed to celebrate her victory is still intact. A student and Democratic activist of the University of Indianapolis told me, “She will enable many little girls in this country to dream of becoming anything in life.”

Despite that, the “woman factor” did not play as central a role as it could have. It was barely mentioned during the election campaign; Hillary herself almost never used it to her advantage. Barack Obama stressed more than once that she was “the more qualified candidate who happens to be a woman.” It may or may not have been a strategy to recover those “frightened white males” who played a decisive role in Trump’s success. Either way, choosing to bet on Hillary’s competence against the tycoon’s instability and inconsistency turned out to be the wrong move. Not even the revelation of Trump’s sexist vulgarities right in the middle of the campaign managed to shift women’s votes. The same votes that clearly gave a massive contribution to his ascent to the White House. As Ann Selzer remarked before the vote, “They want a woman president, just not this one.”

Mistrust toward “crooked” Hillary won out. The same Hillary whom Trump now bizarrely praises in his victory speech. “Hillary has worked very long and very hard over a long period of time, and we owe her a major debt of gratitude for her service to our country. I mean that very sincerely. He said all of this after having hurled insults at her, even very vulgar ones. He called her a “nasty woman” during one of those debates that, according to observers, she invariably won, but that clearly no longer mattered at all. They could not shift the deep anger of a substantial part of America that feels betrayed by the establishment. Hillary is the face of politics that is out of touch with citizens, despite her having been engaged in support of the outcasts since her youth. Her history did not become part of the campaign narrative. That narrative was soon taken hostage by the more-or-less-founded scandals about emails on unsafe servers, and by outlandish conspiracy theories that ranged from Satanism to an alliance with the Chinese. Clinton allowed herself to be dragged into the vortex of mutual attacks and caustic and negative ads. She was not able to oppose the elation of the promise of a rich and prosperous land with the reason of political programs. For Hillary, this was certainly the longest night she experienced in her many lives. It may also be the epilogue of a public life that was spent serving America.