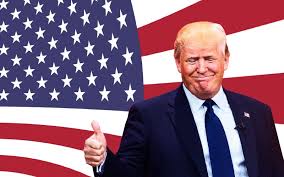 America is like a huge company. Now that the shareholders have cast their vote, a chairman has been elected. His name is Trump. Making money being his priority, he is setting out to reconsolidate “America, Inc.,” hoping to turn it around, make profit and revive its lost glory.

America is about to enter an era of President Trump. Will Trump Tower become the White House, or will the White House turn into the next Trump Tower? Since being elected, Trump’s words and actions, are being watched by the whole world.

There are signs that Trump intends to lead America like his business empire. America to him is a huge company. Now after the shareholders have cast their vote, a chairman has been elected. His name is Trump, and he is viewed as a successful businessman. What could be more appropriate than having a businessman run a company?

Because it is business, business rules apply. No matter what needs to be done, it needs to be cost-effective. As for sentimentality, that will wait until money is made. So far, at least, Trump has been planning to make money his priority and to reconsolidate “America, Inc.,” hoping to turn it around to make a profit and revive its lost glory.

What will Trump do on his first day as president? Abolish the Trans-Pacific Partnership. It is an ambitious strategy that Obama has worked extremely hard to promote during his second term in office. Its aim is to enhance America’s role as the rule-maker for global free trade and to prevent China from setting its own business rules and standards. But now, according to Trump, this strategy is only a pretty shell without substance, and, for America, Inc., this spells disaster.

Therefore, America needs to abolish the TPP. It will re-establish rules for trade and commerce through bilateral negotiations. No doubt, Trump’s secretary of commerce or trade representative will be kept busy. The TPP makes too many concessions and is no good for America’s interests. In other words, the TPP, at least with its current language involving security and ideological factors, is not really to the taste of a businessman.

It is then not possible to win America’s support through negotiated agreements because, to pass the TPP, six or more member states have to agree and their combined gross domestic product must add up to over 85 percent of the sum total of all member states. America’s GDP alone, however, accounts for 60 percent, so without Trump, the TPP will end up an empty shell. With the TPP abolished, what will happen to that small group of partners who have been negotiating with America for years? Huddle together and work harder.

Of course, it is not only the TPP’s partners who are worried. Military allies feel the same from Europe to East Asia without exception.

Trump said that America did not necessarily need to foot the bill for its allies’ defense, so its military friends better be prepared to get ripped off. It is said that Trump is destroying the world America has built since World War II. Because America has always protected its allies, they have gotten used to this relationship out of habit, and thus have not developed their own independent defense capabilities. For this reason, they may spend plenty of time working out how to share defense expenses once Trump takes office.

At this moment when it is unpredictable which way the wind will blow, is America trying to sell “security” to its allies for huge profits? Maybe Trump has never looked at security as simply security; instead, he intends to profit from this massive “security” deal. America should not be that curious about what happens in the world. It should shift its focus back onto itself, back onto its own soil, to revive America’s economy and solve the American people’s unemployment issues. This is what Trump means by “America First.”

Judging from the reaction of America’s allies so far, Trump has already won this battle. Its allies’ worries and anxieties are Trump’s bargaining chips and they are the profit margins for “Chairman” Trump.

However, it is simply not the American spirit to shovel only the snow that lands on its own doorstep – at least not for long, especially in today’s world where China is on the rise. Trump’s America is not turning its back to the world. It is just closing the doors to hone its skills. The savior in American blood will eventually wake up and embrace the world with twice the enthusiasm. It will want to strengthen America’s dominant position. On this, Trump is no different from Obama.