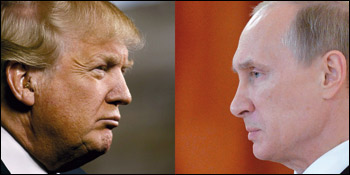 How long will the honeymoon last between the U.S. and Russia this time? The question has been coming up practically every time the U.S. president has changed since the fall of the Soviet Union. The election of Donald Trump starts a new stage of detente with Vladimir Putin. The Kremlin could not have hoped for a better candidate. Probably, it also actively helped this “hope,” if it’s true (as the U.S. intelligence services hypothesize) that Russia interfered in these elections through refined methods of electronic espionage. Trump expressed his gratitude for the esteem he received from Moscow: the Russian Duma raised a glass to his victory, the Russian president immediately congratulated the winner and the two spoke very soon after.

From the Russian point of view, Trump is useful because he is the only American candidate that has questioned Article 5 of the NATO treaty (which provides for mutual defense in the case of external aggression against an alliance member). Therefore, he is potentially a president that could give carte blanche to Russia in Europe. The Trump effect was felt immediately in Eastern European countries: the elections in Bulgaria and Moldova were won by pro-Russian parties, while in Estonia the reshuffling of the executive branch brought to power the Centre Party, which represents the interests of the Russian minority in the small Baltic country. But, indeed, how long will it last?

The first consideration is historic. If the recent past means anything, we can see that each initial phase of detente is followed by stronger tensions. The Bill Clinton administration was the first administration elected in the post-Soviet era. When the Democratic president took office in January 1993, relations with the first president of an independent Russia, Boris Yeltsin, were excellent. They remained so until 1994, when the U.S. politically condemned the armed repression of the Chechen independence movement and in 1995 when the U.S. intervened (with NATO) in Bosnia against the Bosnian-Serb militias. The zenith of the conflict was reached in 1999, when NATO intervened in the Kosovo conflict. Both sides felt betrayed. From a U.S. point of view, Russia betrayed its promise of democracy with the war in Chechnya. Then Russia betrayed its promise to share in the safeguarding of a democratic world order by opposing intervention in the Balkans. In fact, Russia was providing political coverage for an ongoing genocide (in Bosnia) and a potential one (in Kosovo), and therefore it was no longer possible to consider Russia a secondary pillar in the same international system. From the Russian point of view, the U.S. betrayed the promise (never written, but nevertheless a promise) to leave Central Europe as a neutral area. The membership of former Warsaw Pact signatories in NATO was seen as a stab in the back by the Russian National-Communist opposition and as a concession to be accepted with gritted teeth by Boris Yeltsin. Finally, the Belgrade bombings in 1999 decisively wrecked friendly relations between the U.S. and Russia.

In 2000, when George W. Bush ran for president as the Republican candidate, he was Russia’s man, while his rival, Al Gore, was the perpetuator of the Clinton policy, which was considered the more “warmongering” one (and already then the newspapers wrote of a “new Cold War”). The honeymoon with the new Russian counterpart (Vladimir Putin had succeeded Yeltsin a few months before) barely lasted three years. It reached its high point after 9/11, and was consecrated with the meeting on maritime practices in 2002, but then it ended less than a year later, following the conflict in Iraq in 2003 when Russia opposed U.S. intervention against a regime that was its historical ally. In 2007, there was still talk of a “new Cold War” because of Russian opposition to the project for American deployment of an anti-missile shield in Europe. In 2008, with the Russian invasion of Georgia, relations reached their lowest point.

In 2008, when Barack Obama ran for president as the Democratic candidate, he was Russia’s man, while his rival John McCain was the perpetuator of the Bush policy, considered the more “warmongering” one. The repetition of history is perfect, even if the roles are inverted. What happened next followed the exact same script: a honeymoon from 2009 (the moment of the “reset” and “restart” of relations) to 2011, then coldness (on Libya and the Arab Springs), and finally crisis and a “new Cold War” in 2013 (the Syrian crisis, a revolution in Ukraine and the Russian occupation of Crimea in March 2014). And once again, there is talk of a “new Cold War.”

In 2016, Russia’s man is a Republican, like Bush in 2000. The part of the “warmonger,” this time, was played by the Democratic candidate. Again, the roles are reversed, but the game is the same as always, from 1993 to today. Is it possible that this time the honeymoon will last longer than just two or three years? Everything is possible, but there are already glimpses of trouble on the horizon that could make a “new Cold War” burst out again. The stumbling block will probably not be in Europe, which Trump does not know well and which he basically disparages. The stumbling block this time could be Israel. One of the juicy aspects of the new president’s electoral campaign is his intent to put an end to the nuclear deal with Iran and to subsequently pursue reparations with Jerusalem. But Iran is Russia’s main ally in the Middle East. Either Trump will give up on the honeymoon with Russia, or he will give up Israel. Both choices are difficult.