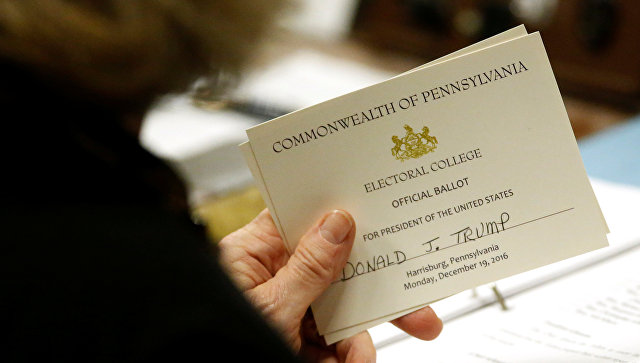 On Dec. 19, Middle America confirmed the victory it won on Nov. 8 over those who supported Barack Obama and Hillary Clinton’s policies. The overwhelming majority of the country’s electoral votes went to Donald Trump. Now there is no doubt that he will become the 45th U.S. president.

The American media, which disparaged Trump throughout the campaign and in between the popular and electoral votes, wrote today, “[The] electors remain[ed] faithful to Trump and select[ed] him as [the] official winner.”

Nothing Helped Obama and Clinton

The American establishment’s schemes to pull the rug out from under Trump during the electoral process failed.

The White House deployed all of its administrative resources in the attempt. The CIA, the Obama administration and Hillary Clinton’s headquarters claimed that “Russian hackers” had helped Trump win through a cyberattack. The electors were under incredible pressure. The American media pointed out that according to Article Two of the United States Constitution, the president is elected by the Electoral College, and not the people. They reiterated that the two-stage electoral process was created in order to prevent flukes from entering the White House.

They portrayed Trump as the death knell of the American people’s “era of hope and change.” But nothing helped.

What’s more, the electoral vote only strengthened Trump’s position. Of the 306 electors who were supposed to vote for him, only two ended up being “faithless.” Trump got 304 votes. Clinton, on the other hand, didn’t even receive her legal 232 votes. Five of her electors voted for different candidates (there were many other candidates besides Trump and Clinton). She only got 227 electoral votes.

But those are the elites. What about the people?

This demonstrates that the Obama administration and the finally-defeated Clinton enjoy neither the trust nor the support of Middle America. The lies about Russia and other aspects of foreign policy pouring in from the White House have reached such a critical mass that they are becoming obvious to regular Americans.

Will the American Press Give Up?

Trump didn’t call the American media corrupt for no reason. Back in October, at a campaign rally in Florida, Trump promised, “Together we will defeat the rigged system and the corrupt media. There’s nothing more corrupt than these people (the media). Not all of them, but most of them. They are a corrupt group.”*

Even CNN provided a telling commentary of today’s electoral results: “He [Trump] also claimed his win was ‘a historic electoral landslide victory in our nation’s democracy,’ though Clinton actually won the popular vote by about 3 million ballots nationwide, making Trump the worst-performing winner in the popular vote since 1876.”

It Won’t Be ‘Same-Old, Same-Old’ After All

There is no doubt that Trump will be president for Americans first and foremost. U.S. interests will be his first priority. After all, his campaign slogan was: “Make America Great Again!”

Clearly, the new American administration will bring many changes to U.S. relations with its allies, NATO in particular. But in any case, things will not be like they were when Hillary Clinton was secretary of state.

It’s hard to say how things will play out. Nevertheless, the attitude of American Christians toward Trump quite accurately expresses the whole essence of what occurred in the U.S. in the period from Nov. 8 to Dec. 19.

Jonathan van Maren, an activist with the Christian pro-life movement, wrote that the majority of Christians “are quite aware that Donald Trump doesn’t care about abortion or religious liberty. But on the other hand, Hillary Clinton is passionate about abortion, and she is passionate about furthering her party’s radical social agenda. Even if Donald Trump does nothing for Christians, at least he’ll leave them alone. After eight years of Barack Obama, that would be a tremendous relief.”

To paraphrase those sentiments, there is hope that even if the U.S. under Trump doesn’t do anything to advance world peace, then at least the U.S. will leave the world in peace for four years.

*Editor’s note: Although these remarks are accurately translated, they could not be precisely verified. However, similar and verifiable remarks were widely reported throughout the 2016 presidential campaign.