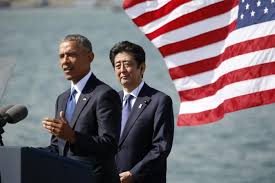 Yesterday, Japanese Prime Minister Shinzo Abe paid a visit to Pearl Harbor, a historical site of the Pacific War, with President Barack Obama. They laid wreaths and paid respects at the Arizona Memorial, built on top of the U.S. battleship USS Arizona that was sunk in the 1941 Japanese air raid of Pearl Harbor. Abe’s visit to Pearl Harbor was meant to reciprocate President Obama’s visit to Hiroshima in May, an exchange that foreign papers have called “a historic gesture of reconciliation.”

“We must not repeat the horror of war ever again,” Abe said, but did not offer a direct apology for the attack. “Japan and the United States, which fought a fierce war that will go down in the annals of human history, have become allies with deep and strong ties rarely found anywhere in history. […] Ours is an ‘alliance of hope’ that will lead us to the future,” Abe said instead, putting emphasis on the consolidation of the U.S.-Japan alliance. He took advantage of this opportunity to offer reconciliation instead of an apology, a sly diplomatic technique he is well known for. Furthermore, he expressed pride in his country for standing by its peace oath as he stated, “We, the people of Japan, will continue to uphold this unwavering principle, while harboring quiet pride in the path we have walked as a peace-loving nation over these 70 years since the war ended.”

Abe’s visit to Pearl Harbor should be viewed as a ploy to gain national interest through the strengthening of the U.S.-Japan alliance, rather than a show of respect to war victims. It’s a calculated approach aimed at solidifying and creating a new framework for the U.S.-Japan alliance that may be endangered by the new Trump administration. Abe has been quick to move, holding an unusual meeting in November with Trump, only a president-elect, and planning to hold a U.S.-Japan summit within one week of Trump’s inauguration next January.

Compared to Abe’s efforts to build an intimate relationship with the United States, South Korea’s response seems rather delayed considering our need to strengthen the Republic of Korea-U.S.-Japan alliance in the wake of North Korea’s nuclear provocations and China’s growing power. We may become a third wheel in the ROK-US-Japan triangular alliance. In particular, there are signs of a change in tide in Northeast Asia with the emergence of strongmen such as Trump, Chinese President Xi Jinping, Russian President Vladimir Putin, and Prime Minister Abe. As South Korea is currently lacking a leader after the impeachment of President Park, we need to strengthen our diplomatic security to protect our national interests in these rapidly changing waters.