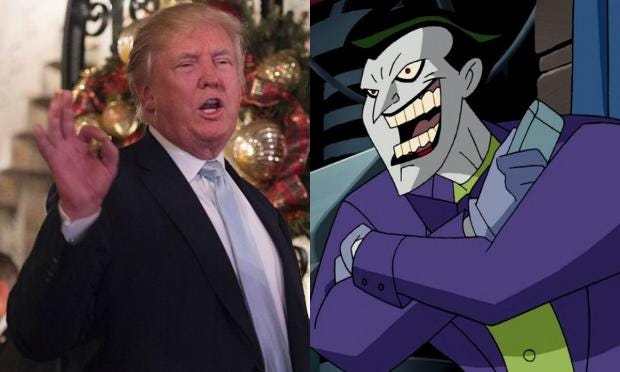 What is happening in the White House reminds me more of “Batman” than of “House of Cards.” Starring Donald Trump and his confidant Stephen Bannon, there are two Jokers seated in the control center of power.

Hollywood is technically dead. Big melodramas, adventure and romantic movies, what the dream factory used to stand for — all are obsolete. What is left of it can be found in independent movies or TV series, which carry on the fire of artistic innovation.

Hollywood now only adapts comics into movies. But who would have thought that this genre would end up being more predictive than series such as “House of Cards” or “The Good Wife”?

Even though these series illustrate the underbelly of American politics, the intrigues, the spin doctors, the betrayal in elaborate plots, they have never come up with figures such as Donald Trump or Stephen Bannon, his ”Svengali“ (I learned this term, which also exists in German, from The New York Times, which wrote that Bannon is “more than a Svengali”– i.e., more than a person who just simply whispers from the shadows).* The “Batman” movies starring Jack Nicholson and Heath Ledger in the roles of the Joker were the most convincing predictions.

They are hot and unleashed, not cold and controlled. The devious, highly intelligent, authentically crazy, at moments affectionate and then again repellent villains seize power in Gotham with a frozen grin on their faces and match up much better with the current pictures from the White House than Francis Underwood’s scheming smile.

Just like Donald Trump, who forged his ego to its full narcissistic grandeur in 14 seasons of reality TV, Stephen Bannon is also a figure of pop. Breitbart, the demagogic internet medium, which he used to catch Trump’s attention, was only the latest stop in his career.

Previously, he earned millions from the rights to the TV series “Seinfeld,” which paradoxically is the epitome of a political correctness even more saturated through the extensive use of irony.

However, the proclaimed successor of Riefenstahl was never capable of producing anything better than trash. Unfortunately he is intelligent enough to realize that.

Now he is on the U.S. Security Council in the world’s most powerful role, hand on the red button. In the “Batman” movies nothing is more dangerous than pride hurt by the acceptance of one’s own shortcomings.

*Editor’s note: The New York Times’ actual quotation was, “ … Mr. Bannon is positioning himself not merely as a Svengali but as the de facto president.”