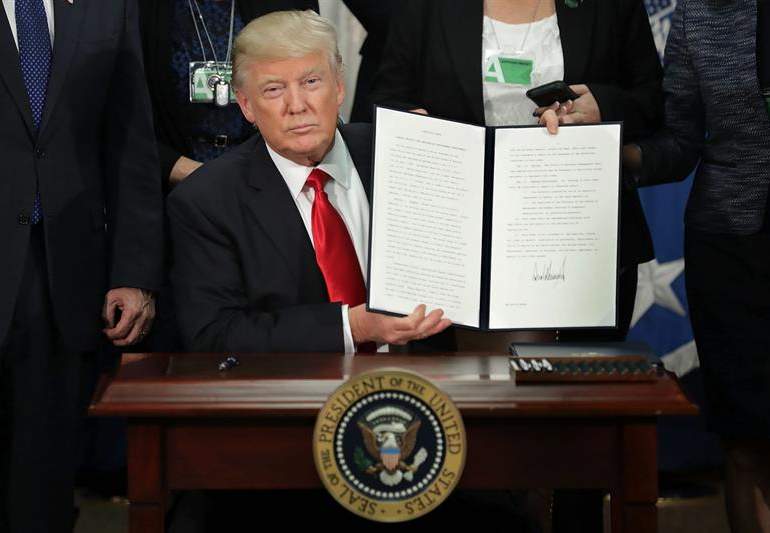 It can be inferred from Trump’s public announcements and positions that trade protectionism will probably characterize the economic policy of his government; a highly expansive public spending policy focused on infrastructure, defense development and tax cuts. That would imply, on the one hand, the revision of trade agreements, such as those signed with Mexico and Canada as well as the economies of the Pacific, higher tariffs, and pressure on North American businesses to invest locally and abandon plans for foreign investment; and on the other hand, it implies that there will be greater fiscal deficits that will force the expansion of public sector indebtedness. The latter would push up the interest rates of that economy, and that tendency could be reinforced by a restrictive monetary policy implemented by the Federal Reserve in the face of a feared inflationary rebound.

As Xavier Vidal-Folch explains in his article, “The Ghost of the Great Depression” (El País, 20/1/2017), higher interest rates would attract capital to the United States, further strengthening the dollar and weakening competition for North American products worldwide. This would help stimulate U.S. imports and limit its exports, thus widening its trade deficit. But in the long run, the strong North American imbalance would weaken the dollar, especially if other commercial giants, like China, keep their currency devalued. Just like in previous administrations, such as Reagan’s and George W. Bush’s, it is probable that in Trump’s administration, a dual situation of fiscal and trade deficits will materialize, which would have significant repercussions.

As I already explained in an article that I wrote more than 12 years ago, “The Deficits of Bush,” (El Universal 11/13/2004), a situation like that limits global growth, since the higher cost financially restricts the demand and generates recessive effects at the global level, particularly if the major world economies raise their tariffs in order to prevent the deterioration of their trade balances, since this would limit the export possibilities of the nations with greater competitive capacity. Additionally, countries highly indebted to strong currencies, as in the case of various Latin American countries, would have to allocate a high percentage of their resources to honor those debts, limiting the availability of funds for development of their fiscal and human capital, with the negative social and economic consequences that come with it. This is the typical case in Venezuela.

The announcements concerning deregulation of oil exploration in areas that have been protected until now in the United States may also affect oil-exporting countries in an important way. The objective that is being pursued by the new administration is to reduce the dependence on foreign oil supplies to the U.S., so it would not be surprising that our exports to that nation – our principal client – would be reduced even further, due not only to the decline in our production, but they would also be cut according to the demand of the country to the north. This could get worse as a result of even greater political and diplomatic deterioration between both countries, especially with the anti-Latino attitude of the new president.

As you can see, the outlook does not look favorable. On the contrary, we must be aware that the time ahead will be very difficult and atypical, with a new American administration characterized by protectionism, egocentrism, lack of diplomacy, crudeness, and a clear antipathy toward Latin Americans. It will not be easy to deal with people like that.